Renesas slid as much as 5.4%, while customers from Toyota Motor Corp. to Honda Motor Co. and Nissan Motor Co. also fell in early trading. One of the biggest suppliers of car chips, Renesas was forced to halt a Japanese plant Friday after a fire broke out in one of its clean rooms, critical areas designed to keep impurities from contaminating semiconductors.

Toyota said Monday it’s trying to gauge the fallout from that unexpected halt, which could ripple across an industry already struggling to keep assembly lines operating during a severe shortage of chips. The Renesas fire will likely worsen a crunch that stemmed from booming demand for home and work gadgets during the pandemic, estimated earlier this year to cost global automakers about $61 billion in lost sales in 2021.

Chief Executive Officer Hidetoshi Shibata warned the plant could be sidelined for a month and cost the company 17 billion yen ($156 million) in revenue. 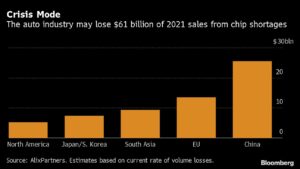 “I’m concerned that this will have a very big impact,” Shibata said at a news conference on Sunday, following the fire.

Renesas, which posted 715.7 billion yen in revenue last year, gets about 6.6% of its sales from Toyota, according to Bloomberg’s Supply Chain Analysis. The Japanese automaker also warned that cold weather-induced semiconductor shortages will force it to suspend a factory in the Czech Republic for two weeks. A Toyota representative said it’s investigating the potential impact from the Renesas stoppage but had nothing more to share at this moment.

“This is turning into a negative story,” said Takeshi Miyao, an analyst at independent researcher Carnorama. “Production is shrinking, not increasing, so the balance between supply and demand is only getting worse.”