A series of hailstorms and tornadoes in the U.S. dominated the natural catastrophe statistics in the first half of 2017, according to Munich RE. A total of six severe, large-scale thunderstorms were recorded, each causing billions of dollars of losses. Worldwide natural cat losses from January to June, however, were below average. 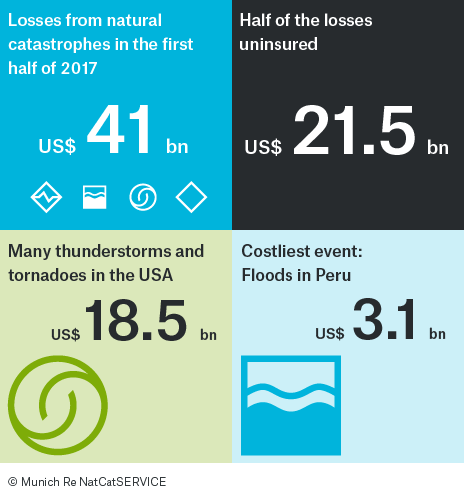 The high number of severe thunderstorms in the U.S. is presumed to have been at least partially influenced by a natural climate phenomenon, especially in the first quarter of 2017: the tropical eastern Pacific off the northwest coast of South America was exceptionally warm, a phenomenon that the Peruvian authorities have dubbed “coastal El Niño”, despite the fact that it is not a full-blown El Niño event. At the same time, it was significantly cooler than usual further west. This difference in temperature can cause teleconnection events that alter the atmospheric circulation over the USA, increasing the likelihood of a large number of severe thunderstorms with tornadoes and hail.

“The exceptional accumulation of severe thunderstorms in the USA highlights just how important it is for insurers to have in-depth knowledge of natural catastrophes and how these are affected by climatic changes. This is true of both natural climatic changes and those that are man-made. Insurers not only help to overcome losses, they also improve our understanding of what triggers them. This is a fundamental basis for preventing future losses,” said Munich Re Board member Torsten Jeworrek.

“The unusual atmospheric conditions in the USA in the first half of 2017 provided the perfect conditions for powerful supercell thunderstorms, which frequently bring major hailstorms and tornadoes. The number of tornadoes observed in the first quarter of 2017 was twice as high as the average for the last ten years,” added Peter Höppe, head of Munich Re’s Geo Risks Research.

Thunderstorms in the U.S. were responsible for three of the world’s five costliest loss events in the first half of the year, each causing economic losses of over $2 billion. The total economic loss from these storms amounted to $18.5 billion, of which $13.5 billion was insured.

The coastal El Niño phenomenon was also responsible for the costliest economic loss in the first half-year, the February and March floods in Peru. High sea temperatures and the subsequent increase in evaporation rates brought torrential rainfall to Peru, triggering numerous landslides and river floods close to the capital city of Lima and in rural areas in the north of the country. Overall losses came to $3.1 billion. Due to the low insurance density in Peru, the insured loss was only a tenth of this figure, at just $380 million.

“Emerging countries in particular would benefit from higher insurance density as it would allow them to recover more quickly from the financial impact of natural disasters,” explained Jeworrek.

Cyclone Debbie, which hit the Queensland coast of Australia in late March, was the second-most expensive nat cat event of H1 2017, with overall losses of $ 2.7 billion and insured losses of $1.4 billion. Debbie made landfall on 28 March in the sparsely populated area around Airlie Beach. It was a category four cyclone (second-highest category) with wind speeds of up to 190 km/h (gusts up to 260 km/h). High winds and torrential rain damaged countless buildings.