A number of devastating earthquakes and powerful storms made 2016 the costliest twelve months for natural catastrophe losses in the last four years, according to Munich Re. Losses totaled $175 billion, more than two thirds above the previous year and nearly as high as in 2012 ($180 billion). Uninsured losses remained substantial at 70 percent. Insured losses totaled $50 billion.

“After three years of relatively low nat cat losses, the figures for 2016 are back in the mid-range, where they are expected to be,” said member of the Munich Re Board of Management Torsten Jeworrek.

North America was hit by more loss events in 2016 than in any other year since 1980, with 160 events recorded, and accounted for $55 billion, or 33 percent, of nat cat losses worldwide (long-term average 39 percent). Of the year’s overall losses in North America, 54 percent were insured (long-term average 44 percent). The most serious event in North America was Hurricane Matthew, which caused approximately $10.2 billion, with over a third of this figure insured. Its greatest impact was in the Caribbean island nation of Haiti, which was still struggling to recover from the 2010 earthquake. Matthew took the lives of around 550 people in Haiti, and also caused serious damage on the east coast of the US. 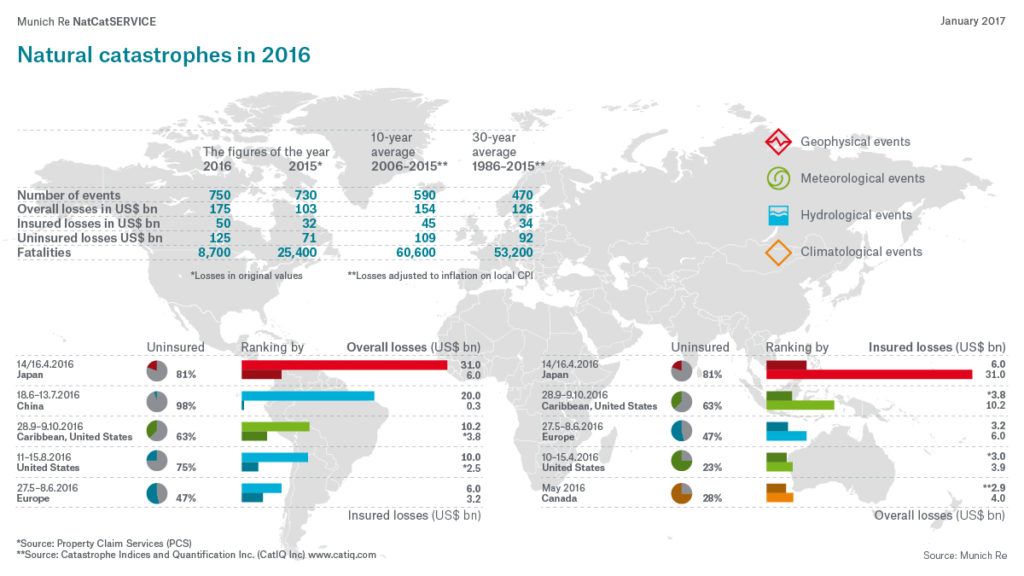 “To mitigate the risks of natural catastrophes, we continue to support strong public – private partnerships that encourage and facilitate greater investment in pre-loss mitigation and improved infrastructure resilience,” said Tony Kuczinski, president and CEO of Munich Re, US. “These factors have the potential to significantly reduce the costs of natural disasters, as well as the social and economic impact on families and communities. To this end, we are hopeful that the incoming President (and his administration) follow through on his campaign commitment to rebuild infrastructure in the US, and that this is done with resiliency in mind.”

The 2016 North Atlantic hurricane season saw 15 named storms – significantly more than in the previous two years and above the long-term average since 1950. This is consistent with the typical pattern of a weak La Niña, a cyclical occurrence in the Pacific natural climate oscillation ENSO, which has a marked influence on weather phenomena in many parts of the world. La Niña conditions tend to promote the formation of hurricanes.

In North America, wildfires in the Canadian town of Fort McMurray in May and major floods in the southern US states were other extreme weather hazards. In August, floods in Louisiana and other US states following persistent rain triggered losses totaling $10 billion (around a quarter was insured).

In Canada, the mild winter with less snow than usual, followed by spring heatwaves and droughts, were the principal causes of the devastating wildfire that hit the oil-sand-producing region of Alberta, generating overall losses of $4 billion, with a ratio of insured vs. uninsured loss of about 70 percent.

“In a sense, the city actually almost got lucky that about 90 percent of its mostly high value homes could be saved from the fire, and not produce an even greater loss. It is also noteworthy that this event, being the largest insured Cat event in Canada ever, comes from a un-modeled peril”, said Philipp Wassenberg, CEO of Munich Reinsurance Company of Canada.

“A look at the weather-related catastrophes of 2016 shows the potential effects of unchecked climate change. Of course, individual events themselves can never be attributed directly to climate change. But there are now many indications that certain events – such as persistent weather systems or storms bringing torrential rain and hail – are more likely to occur in certain regions as a result of climate change”, explained Peter Höppe, head of Munich Re’s Geo Risks Research Unit.

The costliest natural catastrophes of the year occurred in Asia. There were two earthquakes on the southern Japanese island of Kyushu close to the city of Kumamoto in April (overall losses $31 billion; proportion of insured losses just under 20 percent), and devastating floods in China in June and July (overall losses $20 billion; only some two percent of which were insured).