From raising the Russian nuclear submarine Kursk to securing drilling platforms wrenched loose by Hurricane Katrina, Dutch companies have a long history of mopping up after maritime disasters. 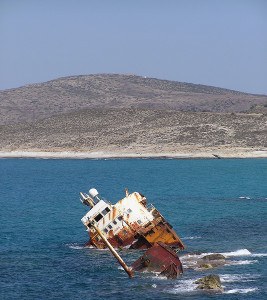 The Rotterdam-based Smit Salvage has not yet won the contract to salvage the $450 million Costa Concordia cruise ship now lying on its side on Italy’s rocky Tuscan coast. Still, it is expected to start pumping half a million gallons of fuel off the stricken ship over the coming days.

The Costa Concordia hit a reef Friday night off the tiny island of Giglio after its captain, Francesco Schettino, made an unauthorized detour from the ship’s programmed course.

The ship’s owner and insurer have yet to decide which salvage company will be awarded the multimillion-dollar contract to remove the massive cruise ship, but experts are already speculating how the daunting task will be tackled.

Van Rooij was involved in some of Smit’s most famous salvages, including the ferry Herald of Free Enterprise that capsized in 1987 near the Belgian coast and the Russian nuclear submarine Kursk, which sank in 2000 in the frigid Barents Sea. He now runs a maritime consultancy that is not involved in the Concordia salvage.

Van Rooij said there were really only two options for this salvage: Patch up the 50-meter (160-foot) gash in the Concordia’s hull and attempt to refloat it, or carve up the liner where it lies into chunks small enough to be carried away on barges.

Refloating the ship would be the cleanest of the two options, but is extremely difficult because of the luxury liner’s size, he said, adding that the ship had about 45,000 tons of steel alone.

Efforts to find those still missing from the Costa Concordia disaster and to begin pumping out the fuel were temporarily halted Wednesday after the vessel shifted slightly. It was not known when those efforts could restart. Weather forecasts predicted increasing waves in the area for Thursday.

In addition, rescue workers blew several small holes in the ship’s hull this week, to speed their search for any survivors.

But he said the forces involved in attempting to pull upright a ship built of tens of thousands of tons of steel make refloating the Concordia unlikely.

“Refloating would be the preferred method and everybody will look at it but I think it’s very doubtful that will be the final method,” Van Rooij said.

That means salvagers are more likely to cut up the ship where it lies, a process that risks releasing pollutants into the waters off picturesque Tuscan coast near a maritime sanctuary for dolphins, porpoises and whales.

Before the salvage can begin in earnest, the first step is to empty the ship of fuel, a risky operation aimed at averting an environmental catastrophe if the ship’s fuel leaks.

Earlier this week, Smit officials explained the process of fuel extraction to reporters.

That involves penetrating the ship’s 17 heavy fuel tanks and warming the oil, which in the cold becomes thick and viscous. That warming process makes it easier to suck out the oil out using valves and pumps, with water or air being piped into the tanks to push the fuel out and fill the vacuum.

“The instructions are clear from the Italian authorities and the harbor master: The ship needs to be removed and if it’s in one piece or more pieces that’s up to the owners and contractor,” said Kees van Lessen, Operations Manager at Smit. “Every contractor will try to remove it in one piece because that’s the easiest.”

But officials acknowledged that re-floating such a huge passenger ship – essentially a small city with hundreds of compartments and cabins – was far more challenging than re-floating a smaller cargo vessel.

Smit, part of marine services giant Royal Boskalis Westminster NV, has been salvaging stricken ships for decades. It teamed up with another Dutch company, Mammoet Salvage, to hoist the submarine Kursk from the Barents Sea after two powerful explosions sent it to the seabed at a depth of 250 feet (108 meters) on Aug. 12, 2000, with the loss of all 118 crew.

The salvagers first had to cut away the sub’s bow, which was wrecked by the explosions. They used a saw wire, pulled back and forth through the hull by hydraulic cylinders mounted on anchors on either side of the Kursk, technology developed by Smit that Van Rooij said had never been used before.

The 9,000-ton wreck was then lifted to a transportation platform and shipped to a dry dock in the Russian Arctic port of Murmansk.

Because the salvage contract for the Costa Concordia has not yet been awarded, neither Smit’s parent company Boskalis nor Mammoet would comment directly on the Italian operation Wednesday.

Mammoet spokesman Johan Pastoor said the company was not involved in the Costa Concordia salvage at this stage, but did not rule out involvement in the future.

Whichever company and method of salvage is ultimately chosen, the Concordia itself – which boasts at least 10 decks and only came into service in 2006 – may never cruise again.

“In my opinion, from my experience, vessels in this position are most probably most times a total loss,” Van Rooij said.