Cited for an aggressive campaign to counter workers-compensation scams throughout the state, New York Inspector General Catherine Leahy Scott was honored with the “Fraud Fighter of the Year” award by the New York Alliance Against Insurance Fraud, an alliance of 104 insurance companies in the state. 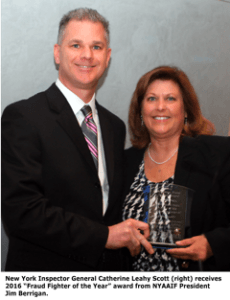 The award was presented during NYAAIF’s recent annual meeting.

“The IG’s efforts put teeth behind our anti-fraud marketing campaigns in providing valuable deterrence though public awareness and vigorous prosecution,” Berrigan said in presenting the award. He also commended Scott for reaching out and working with insurers to identify fraud trends and develop strategies to counter them.

NYAAIF also previewed its 2016 consumer campaign. It will include TV & radio ads, billboards and a roaming “Fraud Squad” van plastered with anti-fraud messages. The campaign theme is “Insurance Fraud Hurts . . . Everyone.” It launches in May.

Frank Orlando, head of the fraud unit of the state Department of Financial Services, briefed fraud fighters on no-fault fraud trends in the state. The Massachusetts Insurance Fraud Bureau profiled a huge automobile rate-evasion ring that operated in New York and Massachusetts.