Welcome to Massachusetts signs can mean more to drivers than just crossing a state line.

For some, they also signal that it’s OK to pick up their cellphones, punch in a phone number and make a call. That’s because all the Bay State’s immediate neighbors except Rhode Island now have laws banning the use of hand-held cellphones and other mobile devices by adult drivers. 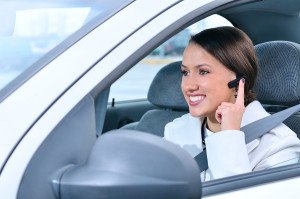 On July 1, New Hampshire joined several other Northeast states including Connecticut, Vermont and New York that require motorists to use hands-free technology such as Bluetooth, with exceptions for emergency situations. Violations in those states can bring fines and, in some cases, auto insurance surcharges.

A 2010 Massachusetts law bans texting while driving and any cellphone use whatsoever by junior operators 18 or younger. But adults can still hold their phones and drive at the same time, so long as they’re not texting or emailing.

Whether that changes anytime soon remains an open question. Several bills that would require hands-free cellphone use were filed for the 2015-2016 legislative session. None have been heard yet and legislative leaders have given no indication the issue is a priority.

Republican Gov. Charlie Baker has not committed to signing any legislation that reaches his desk, but takes seriously efforts to improve safety on the roads, a spokesman said.

Those who support a tougher crackdown on distracted drivers can’t easily explain why Massachusetts has yet to fall in line with most of its neighbors.

“It’s a little bit of a mystery to me, quite honestly,” said Jeff Larson, president of Safe Roads Alliance, a Massachusetts-based organization that advocates for highway safety programs.

Opponents of hands-free rules decry what they view as “nanny state” laws and contend it’s up to individuals to take personal responsibility to ensure that cellphone conversations aren’t taking their attention off the road. Many Massachusetts drivers have taken the initiative to purchase hands-free technology or avoid using their phones altogether while driving, they add.

Larson acknowledges that motorists can be equally distracted by a phone call regardless of whether they’re holding the device to one ear or not. But a hands-free mandate, he contends, would make it easier to enforce the current no-texting law because police would not have to discern if drivers were texting or doing something else with their phones.

A decades-old statute also allows police to act if they determine a driver’s ability to operate a vehicle safely has been compromised, even if a specific law hasn’t been broken.

Through June, nearly 15,000 citations for texting had been issued in Massachusetts under the 2010 law, according to state data. Fines range from $100-$500.

Rep. William Straus, a Mattapoisett Democrat and House chair of the Legislature’s transportation committee, is among lawmakers who have filed hands-free bills in the current session, arguing that distracted motorists not only put their own safety at risk but that of other drivers and pedestrians.

“There is no personal liberty to create unnecessary hazards for other members of the public,” he said.

But Straus’ panel has advanced bills mandating hands-free use in each of the last two legislative sessions only to have them fail to come up for votes. He expects the committee to hold a public hearing in the fall before sending the full Legislature another bill to consider.

New Hampshire’s new law carries fines from $100-$500 and since that state is generally perceived as more reluctant to regulate personal behavior, passage there is seen by advocates as further impetus for Massachusetts to act.

In Rhode Island, a hands-free cellphone bill passed the state Senate in March but was referred for further study by the House.

Aside from its Northeast neighbors, Massachusetts is more in step with the nation as a whole. In all, 14 states and the District of Columbia have blanket bans on hand-held devices while driving, though many like Massachusetts prohibit texting and any cellphone use by teen drivers.

The National Highway Traffic Safety Administration reported 3,154 deaths in the U.S. from crashes involving distracted driving – which can also include such activities as eating and drinking, personal grooming, or reading maps – in 2013, the most recent available statistics.