Pop quiz: What percentage of drivers have brushed or flossed their teeth behind the wheel? While it’s crazy to think that anyone would floss their teeth while cruising down the highway, it’s just one distraction that people admitted to in a new survey from Erie Insurance.

To discourage distracted driving in conjunction with National Distracted Driving Awareness Month in April, Erie Insurance asked drivers what they do behind the wheel.

The online survey of 1,915 U.S. drivers aged 18 and older was conducted in February by Harris Poll on behalf of Erie Insurance. 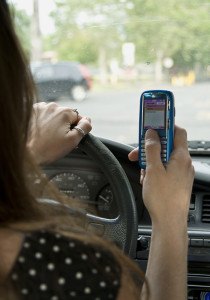 “A distraction is anything that causes a driver to take their eyes off the road, their hands off the wheel, or their mind off their primary task of driving safely,” said Doug Smith, senior vice president of personal lines at Erie Insurance. “Our survey found drivers unfortunately are engaging in a wide range of distracting and potentially dangerous behaviors.”

Besides the obvious phone distractions of texting and talking, other distractions people admitted to ranged from public displays of affection to personal grooming to taking selfies.

Other reported distractions included putting in contact lenses or eye drops; curling eyelashes; scratching off lottery tickets; and even playing the guitar while driving.

The survey revealed regional and other differences about who texts while driving.