Some of New York City’s most dangerous streets are about to get safer as part of a $250 million project that will target roadways in the outer boroughs where dozens of pedestrians have been killed or injured in recent years.

The city’s Department of Transportation plans to extend curbs, widen road medians and add protected bicycle lanes to reduce fatalities on four major streets in Queens, Brooklyn and the Bronx. Benches will be set up and trees will be planted on pedestrian islands envisioned on traffic-choked roads. The plan will be unveiled at a city council budget hearing Thursday. 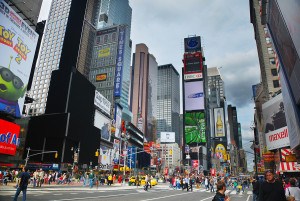 “We had this spurt in the auto age where we built these enormous arterials. We built them very wide. We designed them to speed the movement of cars,” Trottenberg said. “Pedestrians were a bit of an afterthought.”

About $100 million will be spent on Queens Boulevard, a corridor that cuts through more than half of the borough, where 55 pedestrians were killed or seriously injured from 2009 through 2013.

The plan is part of Mayor Bill de Blasio’s ambitious “Vision Zero” program, which aims to eliminate all pedestrian deaths. That initiative has implemented tougher penalties on reckless drivers, more speed bumps on busy streets and a reduced speed limit across many densely populated areas.

Construction on the roadways project, called “Vision Zero Great Streets,” will be fast-tracked to ensure that some of the changes will be implemented by 2017.

The other streets that will be included in the project are Fourth Avenue in Brooklyn, Atlantic Avenue in East New York and the Grand Concourse in the Bronx.