The measures are among the first steps in de Blasio’s wide-ranging Vision Zero plan, which is intended to make streets safer and curb a recent rise in pedestrian fatalities. The plan’s ambitious goal is to eventually eliminate all traffic fatalities in a city of 8.4 million people.

“In a city as big and complicated as this, it’s not easy. But we did not come here, any of us, to do easy things,” said de Blasio. “We came here to do things that would actually help people. And we can’t keep losing New Yorkers because we haven’t done all in our power to protect them.” 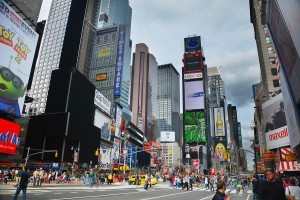 The measures include enforcing tougher penalties on taxi drivers involved in serious crashes. They also create slow speed zones around some schools and toughen penalties on drivers who fail to yield to pedestrians and bicyclists.

De Blasio also cheered the State Legislature for approving a measure last week that would allow the city to lower its standard speed limit from 30 mph to 25 mph. Gov. Andrew Cuomo is expected to sign the measure in the coming weeks.

The new city ordinances do not establish a uniform crackdown on jaywalking, which will be enforced at the discretion of local NYPD precinct commanders, de Blasio said.

The bill signing took place in the schoolyard of a Queens school, just a block from where 9-year-old Noshat Nohian was killed by a car in December.

Hearing her son’s name spoken by the mayor, Noshat’s mother Dana Lerner said, “It’s the finality of it. It’s the fact that it’s really true. A lot of this is about keeping his legacy going. It’s really important for me.”

Last year, 286 people were killed in traffic accidents in New York City, nearly as many as those who were homicide victims. Additionally, another 4,000 or so New Yorkers are seriously injured in accidents each year.