An analysis of bus-related traffic records across New York state over the last three years shows most of the accidents involving school buses are caused by other drivers.

The Rochester Democrat and Chronicle reports that more than 3,900 bus-related accidents were recorded statewide from July 2010 to May 2013. Those include passengers bruised by sudden stops, minor fender-benders and serious crashes.

Of the 2,783 crashes reported statewide, 1,540, or about 55 percent, were considered “preventable.” Of those, the bus drivers were considered to have “poor judgment” or be “distracted” in 119 crashes. 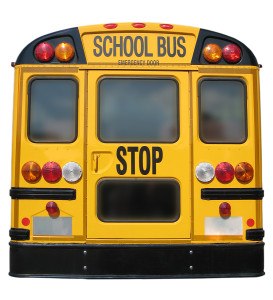 There were 376 students injured statewide in bus crashes during those years, and one was killed. Of the injuries, 26 were caused by a student’s own bus, including minor head injuries from sudden stops, a pedestrian hit by his bus and two students hurt when their backpacks were caught in the bus doors as the vehicle began to pull away.

School buses are still considered the safest means of transport to school.

The American School Bus Council notes that bus trips comprise about a quarter of all the miles students travel by vehicle, yet account for only about 4 percent of all injuries.

The National Highway Traffic Safety Administration shows that about 1 percent of transportation-related student fatalities that happen during school travel hours are related to school buses.

The state Association for Pupil Transportation says motorists pass stopped school buses at least 64,000 times every day in New York alone. The association supports a bill in the state Legislature that would allow license plate cameras on buses to record illegal passing and stiffer penalties for offenders.