What: Multimillion dollar damage to U.S. Customs and Port Authority for New York and New Jersey

How the damage happened: Superstorm Sandy 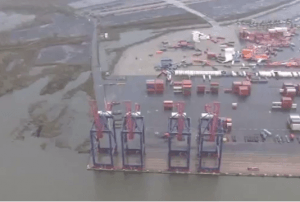 Powerful Superstorm Sandy hit New Jersey and New York hard. Besides damage to public transportation and residential communities, the Port Authority for both New York and New Jersey, as well as U.S. Customs, sustained substantial damage. After the storm, receipt of cargo was not possible for the busiest ports on the East Coast – nearly 1.5 million containers are processed annually – but within four days the ports were back in business processing cargo.

“We had ships lined up in the Atlantic waiting for the Customs facilities to become operational and supports to be operational so that the guys could offload ships,” said Kim Brooks, managing director and team lead of the cleanup effort.

SRM, a commercial and retail disaster restoration service provider, was hired as a result of work the company was doing at a plant in Staten Island at the time the storm hit. SRM’s team arrived the day after Sandy struck to expedite the restoration process.

The company’s team consisted of 190 workers who worked around the clock for the first four days and then in 16 hour shifts for about three weeks thereafter.

The work consisted of hazard identification, water extraction, cutting sheetrock, hazardous waste cleanup, salvage, content inventory and sanitization of the close to 1.3 million square foot area which needed to be up and running simultaneously to receive cargo.

“There were significant amounts of office furniture and things like that, too, that had to be discarded, ordered, replaced, reset, that kind of thing. It was a coordinated effort. You needed to have them both open essentially simultaneously because you couldn’t necessarily go put all the efforts on the Customs and then have another three or four‑day lag before you could open the ports, so we basically attacked those simultaneously,” said Brooks.

In order to accommodate priority changes and keep everyone updated on daily accomplishments two meetings were held each day.

“There was a briefing in the morning and then a briefing approximately 5:30, 6:00 in the evening to layout what had been accomplished and what was going on for the next morning. Then we’d have another meeting at 9:00 to see what developments had occurred overnight, to see if priorities had changed. Things change by the hour in those situations,” Brooks said.

One factor that helped SRM get the project was the security clearance employees already had in place, the result of its recovery work on the USS Miami.

“We’ve done this for a number of years…getting all of our people that travel with us certified so that they have their Transportation Workers identification cards which allow you into airports or railway terminals or shipping ports or those types of things. You’re not going to be able to just show up with a driver’s license or a passport to be able to get in and work in one of those locations, so that’s something that we always do,” said Brooks.

According to Brooks, once government security clearance is obtained, it’s the same no matter what branch of government is involved.

“You have a ratio that most of the government will allow in terms of a card‑carrying member, if you will, to workers. That ratio is usually somewhere in the neighborhood of one to five, one to seven. All 190 people don’t have to have the clearance, but you have to have enough people that have clearance to adequately supervise those who do not,” Brooks said.

A challenge when working on government jobs is getting access to affected locations and getting passes to work in restricted areas, Brooks said.

“It was actually tough, initially, just to get over the bridge to get onto Staten Island. Once you overcome those things, that’s the biggest hurdle. If you weren’t on Staten Island, you weren’t getting on Staten Island the first 24 hours, and you weren’t coming off Staten Island. They had to insure that the bridges and that type of thing were sound. In any of these events, that’s usually the biggest deal is to have a governor’s pass or something along those lines that gets you access into the zone because they just don’t want sightseers and that sort of thing congesting the recovery effort,” said Brooks.

Another challenge was access to fuel in the initial days after the storm. Guidelines were set in place restricting fuel purchases to certain days of the week. SRM, a company experienced in dealing with unique logistical challenges during restoration projects, was able to provide fuel at cost to the Port Authority which helped them service their clients.

“You wouldn’t want this to be something that would be your first time going through. It would be very difficult to pull that off on that kind of scale without the experience and expertise of having been there and done that before,” said Brooks.