Many law schools try to attract more applicants by showing off how well their graduates do in the real world. The schools tell their prospective students about their graduates’ high employment and salary figures. 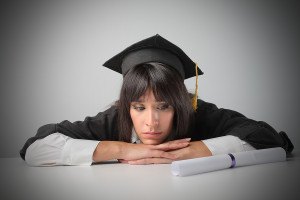 But critics say some schools are inflating these numbers to drum up their popularity. These critics use the blogosphere and social networks to air grievances among themselves. Some are taking it one step further, by seeking to gather new plaintiffs for a wave of “consumer fraud” class action lawsuits against U.S. colleges and universities.

“We have been tracking this issue closely for six months, and the noise on the blogs and social networks is getting louder,” said Robert Smith, a higher education attorney at law firm LeClairRyan in Boston.

“Among those disenchanted souls who believe law degrees should come with guarantees of ‘gainful employment or your money back,’ the effort to find potential plaintiffs has been bold, to say the least,” he said.

“In a recent, Internet-published interview, an attorney representing putative plaintiff classes in separate actions against two law schools even went so far as to declare 2012 ‘the year of law school litigation.’ ”

Will 2012 Be the Year of Law School Litigation?

Earlier this year, seven former students from New York Law School and Thomas M. Cooley School of Law filed class actions lawsuits. They accused their alma maters of trying to artificially boost enrollments by exaggerating or misrepresenting graduates’ employment and salary statistics, according to the attorney.

While only three consumer-fraud class actions have been filed against U.S. law schools thus far, if pending motions to dismiss these cases go nowhere, chances are good that a wave of new suits will be filed against law schools across the country, the attorney said.

Another attorney from LeClairRyan, class-action defense lawyer Michael Haratz, says online forums have been full of speculation that at least 15 other schools are on a “hit list” of possible targets for similar suits.

“Even institutions that are not on this list need to proactively manage the potential risk posed by the proliferation of these veiled and not-so-veiled threats,” said Haratz. “The management of potential litigation shouldn’t just start early — ideally, it starts before the plaintiff’s bar has your school in its sights.”

For education officials, risk-managers and in-house counsels at universities, determining exactly what action to take can be difficult, because the risk profile for each school is highly context-dependent, Haratz said.

“Let’s say the university is under the gun from outraged alumni who are tired of watching bloggers sully their law school’s name,” he said. “That school might feel pressured to act quickly, but it is critical to think clearly about the potential consequences and objectives of any response.”

He said there are many factors to consider. “If there is no pending litigation, but only litigation that is threatened in one or more blog postings, the strategy and action, if any, that is appropriate will vary depending on the circumstances, balancing a variety of objectives and interests, including the need to maintain the reputation of the institution and the need to proactively address threatened litigation.”

The attorney recommends a few basic proactive steps for law schools everywhere. “For example, whether your school is on the ‘hit list’ or not, you should already be looking carefully at the content and presentation of your own salary and employment data. Make careful examination of whether this information is consistent with regulatory requirements and whether modifications might be warranted, as well as any risks associated with various modifications,” he said.

“It also makes sense to look into how you are managing your communications within your board of trustees and to influential alumni and the rest of the world.”

He also said that while taking an aggressive approach, including suing class-action attorneys and bloggers for defamation, might mollify alumni, even these strategies could backfire.

The attorney advised that if a class action suit has just been instituted in a state court, the school should look at whether the court in which the action is brought (or any judge assigned to the case) has much experience with class-action litigation.

“If the judge has very little experience with class actions, it might make sense to move the case to federal court, where such litigation is likely more commonplace.”