As the Midwest recovers from record flooding, cities and towns along the Red River in Minnesota, North Dakota and Canada are preparing for a deluge of their own as the heavy snows of winter start to melt.

Fargo, North Dakota, has declared an emergency and ordered up 1 million sandbags, calling on residents to volunteer to fill the sacks that will be used to make temporary walls to hold back the river. In Canada, Manitoba has been predicting the Red would flood for weeks.

“The recipe is there for flooding,” said Corey Loveland, a U.S. hydrologist at the North Central River Forecast Center in Chanhassen, Minnesota. “If you just take into account the amount of snow basically everywhere, the potential is to have widespread flooding.”

The Red River forms the border between North Dakota and Minnesota and flows north into Manitoba passing through downtown Winnipeg. Its banks are flanked by farm fields. North Dakota is the second-largest American wheat grower, trailing Kansas, according to the U.S. Department of Agriculture. 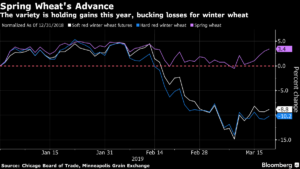 This week, flooding has already snarled rail traffic in much of the Plains, slowing or halting shipments of grain. Buyers of spring wheat were paying lofty premiums for supplies in the cash market, which pushed up futures, said Adam Knosalla, a broker at Frontier Futures in Minneapolis.

“You have a lack of farmer sales at the same time logistics are a mess,” Knosalla said by telephone. “It’s not expected to get any better in the immediate future.”

The May spring wheat contract is heading for a fifth straight gain on the Minneapolis Grain Exchange, its longest rally in six months.

The impact on wheat planting will depend on when the flood occurs, said Andy Karst, a meteorologist at World Weather in Overland Park, Kansas. An early flood would cause the destruction of a lot of property, but would give fields a chance to dry out, he said. But if the spring starts cold and melt is delayed, then rising waters could crowd farmer’s planting schedules.

At least 91 percent of the upper Midwest and Great Plains is snow covered to an average depth of 10.7 inches, according to the U.S. National Operational Hydrologic Remote Sensing Center in Chanhassen, Minnesota. The center tracks snow nationwide and sends out airplanes to measure its depth.

Loveland, of the river forecast center, said the flooding severity will depend on how fast that snow melts and how saturated or frozen the soils under it are. The worst thing that could happen is for temperatures to warm as heavy showers come in. Little rain is in the forecast for the next seven days, he said.

Elsewhere, high water on the Missouri River has caused record flooding across Nebraska and the Mississippi River has been spilling its banks for weeks. The same fear of a rapid snowmelt along with heavy rain apply there.