PG&E Corp., suspected of starting California’s deadliest wildfire, may soon get help from state lawmakers – just not the help it most wants. 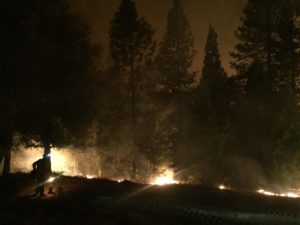 As early as Dec. 3, a lawmaker plans to introduce a bill that would give the state’s largest utility owner a way to pay off billions of dollars in potential liabilities it faces from the Camp Fire, the deadliest in state history. But lawmakers appear unlikely to give PG&E and the state’s other utilities the relief they have sought for a year: a change to rules that automatically hold the companies responsible for any fire damage tied to their equipment.

Assemblyman Chris Holden, the Democrat who plans to introduce the measure for the 2018 fires, said he’s currently unconvinced legislators need to review the rule, known as inverse condemnation, since they’ve earlier passed a package that addresses blazes starting next year.

“We laid out a 2019 strategy and we need to see how well that works, if and when we ever get back to a place of thinking we need to revisit inverse condemnation,” he said by telephone.

And as legislators grapple with the threat increasingly frequent fires pose to the state, the utilities are about to lose their most powerful ally in Sacramento, Governor Jerry Brown.

His successor, Gavin Newsom, will be sworn in Jan. 7. A bill introduced next week would need to be signed by the new governor, because the legislature will spend almost all of December and the first week of January on break. Newsom has given no indication of his view of the legislation. A spokesman for the Democrat didn’t respond to emails requesting comment.

“Governor Brown’s cachet is limited now, so I don’t know if his arm-twisting would make a difference at this point,” said state Senator Jerry Hill, who has become a fierce PG&E critic since one of the company’s natural gas pipelines exploded in his district in 2010. “It would have to be Gavin’s wish to get it done.”

PG&E shares have plunged roughly 50 percent since the start of the Camp Fire, which killed at least 85 people and torched more than 13,600 homes. The stock has stabilized after news of Holden’s bill, first reported by Bloomberg, and comments by the state’s utility regulator that it doesn’t want the company to go into bankruptcy. The shares gained 3.4 percent Monday to $24.64 at 12:10 p.m. New York time.

State fire investigators blamed PG&E’s equipment for starting at least 17 of the wind-driven wildfires that tore through Northern California in 2017, leaving 44 people dead. Barraged by lawsuits that could cost the company more than $17 billion, PG&E and its chief executive officer, Geisha Williams, lobbied hard in Sacramento for a fix to inverse condemnation.

Under that legal doctrine, California utilities can be held liable for economic damages from wildfires sparked by their equipment even if they followed all applicable safety rules. PG&E and the other utilities argued that the system makes them the insurers of last resort in a state whose fire season, once confined to a few dry summer months, now seems to extend year-round.

The wildfire bill that emerged – SB901 – let PG&E use bonds to pay off the costs of settling 2017 fire lawsuits. But it didn’t address inverse condemnation.

A bill being drafted by Holden’s office would allow PG&E to use bonds for Camp Fire costs as well. But lawmakers interviewed by Bloomberg said they sense little interest among their colleagues in tackling inverse condemnation. Although the utilities want the system changed, insurance companies and lawyers don’t.

‘No Appetite’
And after the trauma of the last two fire seasons, many politicians fear being seen as doing the utilities’ bidding. Lawmakers only passed SB901 in the final hours of the last legislative session, after days of intense closed-door negotiations.

“There was really no appetite for changing inverse condemnation this year, and that was a fairly bipartisan view,” said state Senator Scott Wiener, who represents PG&E’s hometown of San Francisco. “So I’d be surprised if we went back and did it next year.” He said he’s open to Holden’s bill but wants to see the language before deciding whether to back it.

PG&E emphasizes that the cause of the Camp Fire remains under investigation. It has said, however, that one of its power lines near the fire’s suspected ignition point unexpectedly went dark 18 minutes before the flames were first reported. State fire investigators have also taken possession of equipment on a second, smaller PG&E line that experienced an outage 12 minutes after the fire began.

Holden said he plans to introduce his bill Dec. 3, the swearing-in date for newly elected lawmakers and the only day the legislature is scheduled to be in session next month. Brown – who backed changes to inverse condemnation and has relied on the utilities as allies in the fight against climate change – could work behind the scenes in December to line up support, and several lawmakers said they expect him to do so. But it would be up to Newsom to sign the bill, if it passes the legislature. Holden said he would like to see this happen by the first quarter of 2019.

PUC Role
Longer-term legislation would come next, while the California Public Utilities Commission will explore whether to restructure the company. The topic could come up Thursday when the commission is scheduled to approve a series of safety-related changes at PG&E that grew out of the agency’s investigation of the 2010 explosion.

Holden anticipates that the legislature will work with the PUC, and that depending on the number of bills on the matter, the committee that worked on SB901 exclusively could be extended, or the governor could even call a special session.

While investors may like to see swift action from Sacramento, Assemblyman Marc Levine, who voted against SB901, said there’s time for more thoughtful legislation. He noted that the deadline to introduce new bills is in late February.

“One thing is for sure: I am not focused on PG&E’s stock price at the moment,” he said. “I’m focused on how we help these communities recover.”