California utility giants PG&E Corp. and Edison International are one step closer to changing a state law that has exposed them to billions of dollars in wildfire liabilities.

Late Tuesday, California Governor Jerry Brown proposed a bill that would require a court to consider whether a utility acted “reasonably” when deciding whether it should end up on the hook for fire damages. Brown said the proposal wouldn’t affect the potential liabilities PG&E and Edison face for blazes that devastated the state in 2017. Still, it’s a win for PG&E, which has been lobbying hard to change a policy that holds utilities responsible for the costs of wildfires their equipment caused, even if they weren’t negligent.

California investigators have already named PG&E equipment as the ignition source of 16 of the swarm of fires that swept Northern California wine country starting in October, destroying thousands of homes and killing 44 people. The probes alleged violations of state law in 11 of those incidents. PG&E said in June that it will take a $2.5 billion pretax charge tied to some of those blazes. The San Francisco-based utility owner could be on the hook for billions more, and the uncertainty has wiped out more than $13 billion of the company’s market value.

‘Specific Support’
Under California law, utilities can be held liable for costs if their equipment is found to have caused a fire – regardless of whether they followed safety rules – based on a legal principle known as “inverse condemnation.” 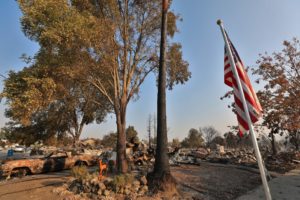 “The fact that the governor is coming out reiterating specific support for doing something to fix inverse condemnation is being seen as significant,” said Kit Konolige, an analyst at Bloomberg Intelligence in New York. “It’s good news in the sense that it’s a data point that says, ‘Hey, something’s going on. The governor seemingly in discussions with legislators is talking about pushing ahead with it.’ But it’s not a done deal. It ain’t over ’til it’s over.”

“We look forward to reviewing the governor’s statement,” Lynsey Paulo, a PG&E spokeswoman, said by email. “We believe comprehensive public policy reforms are urgently needed to address the challenges brought about by more frequent and more intense wildfires.”

Less than a week ago, PG&E’s senior vice president of strategy and policy, Steve Malnight, said in an interview that the company was seeking a state policy that would take into account whether a utility acted in a “reasonable way” when determining wildfire liabilities.

JPMorgan Chase & Co. has estimated PG&E’s total gross liabilities from 2017 at as much as $17.3 billion. Investors have been waiting for the report from the California Department of Forestry and Fire Protection on PG&E’s role in the Tubbs blaze – the deadliest of last year’s fires.

“PG&E shareholders are trying to find any kind of comfort that they can that the liability for the wildfires will be at least be below the worst-case scenario,” Travis Miller, a Chicago-based utility analyst for Morningstar Inc., said by phone Tuesday.

Inverse Condemnation
Under Brown’s proposal, the inverse condemnation provision would be changed so that a court balances “the public benefit of the cause” of the fire with harm caused to private property and determine whether the utility acted “reasonably.” Separately, an independent evaluator would review each utility’s compliance with a required wildfire mitigation plan.

Brown and the utilities face an Aug. 31 deadline for getting the plan through the Legislature.

It will be reviewed by a committee of legislators, who are holding their first hearing Wednesday in Sacramento. Lawmakers are also considering a bill that would allow PG&E to issue bonds backed by customer charges to pay off claims from last year’s fires.

“It’s the Legislature’s job to now determine what’s best for Californians,” state Senator Bill Dodd, co-chair of the committee, said in an emailed statement. “That is what we will be working on in the conference committee.”

‘Due Diligence’
Senate President Pro Tempore Toni Atkins said in an emailed statement that she’s “confident the committee will do its due diligence and consider all stakeholder input in discussing all relevant issues, including those outlined by Governor Brown.”

Meanwhile, the Ratepayer Protection Network, a coalition of residential and industrial customers, urged lawmakers to “prioritize safety, accountability and affordability and not give investor-owned utilities a blank check paid for by customers.” And a group of trade associations representing insurers in California described Brown’s as “a utility bailout” that would shift liability “onto the backs of wildfire survivors, homeowners, communities and businesses.”

The California constitution currently requires the state to reimburse local agencies and school districts for certain costs mandated by the state. The bill Brown proposed would provide that “no reimbursement is required by this act for a specified reason.”