Scientists and engineers are simulating precisely how a large-magnitude earthquake along the Hayward Fault would affect different locations and buildings across the San Francisco Bay Area.

A team from Lawrence Berkeley National Laboratory and Lawrence Livermore National Laboratory, both U.S. Department of Energy national labs, is leveraging powerful supercomputers to examine the impact of high-frequency ground motion on thousands of representative different-sized buildings spread out across the California region.

Their work will help show how different seismic wave frequencies of ground motion affect structures of various sizes. Lower-frequency ground motion is known to affect larger structures and is easier to replicate by computer simulation. Small structures like homes are more vulnerable to high-frequency shaking, which requires more advanced computing to simulate. 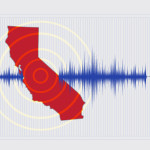 Because it runs through the East Bay, the most populated subregion of the San Francisco Bay Area, the Hayward Fault is considered one of the most dangerous faults in the United States. The fault hasn’t generated a major earthquake since 1868, a source of concern for experts who cite evidence supporting the idea that the East Bay fault is overdue for a major earthquake.

The national lab researchers simulated ground motions at a broad range of frequencies to quantify seismic risk for representative building structures on a regional scale. A total of 9,600 structural dynamic simulations were employed and analyzed to study the risk variation on a 100-kilometer by 50-kilometer domain for two events: one at magnitude 6.5, and another at magnitude 7.

Simulations showed that two buildings with the same number of stories equidistant from the fault line and only roughly 3 miles apart can have a substantially different damage potential due to the differences in which seismic waves emanating from the fault merge together. Buildings in proximity to the fault rupture and fault-rupture directivity zone were found to be at greater risk of damage from the earthquakes, and fault-slip-associated permanent ground displacement was shown to increase with event magnitude.

The research was funded by the Department of Energy’s Office of Science.