Law enforcement officers kept a close eye Monday on the estimated 330,000 people who traveled from all over the U.S. and beyond to pack in the Las Vegas Strip and downtown’s Fremont Street. The Las Vegas Metropolitan Police Department had every officer working throughout the weekend and was aided by the Nevada National Guard and federal agents.

Rosy-cheeked visitors took selfies and livestreamed the celebration amid temperatures in the mid-40s (4 Celsius), much warmer than most of the U.S. They wore glittery hats, tiaras and other 2018-themed paraphernalia as they hugged and cheered on the new year.

“One bad incident is not going to deter us from having a good time,” Honolulu resident Pettra Stark, who planned her trip after the Oct. 1 shooting, said while standing underneath the massive video canopy on Fremont Street. 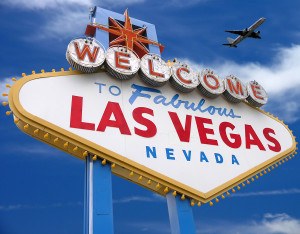 For Stark, the heavy presence of armed officers was reassuring. But not everyone felt the same way, including Adrian Dominguez, who traveled for the festivities with 10 other relatives.

“It’s not pleasant to see so many officers,” Dominguez, a resident of the northern Mexico border city of Ciudad Juarez. “They are everywhere.”

The heightened security comes after a high-stakes gambler killed 58 and injured hundreds more after he shattered the windows of his suite on the 32nd floor of the Mandalay Bay hotel-casino on the Strip and unleashed gunfire on a country music festival below before killing himself.

On Saturday, two security guards were fatally shot while investigating a disturbance at Arizona Charlie’s Decatur, a hotel-casino just west of the Strip. Police said the suspect was hospitalized with a self-inflicted gunshot wound. Authorities described it as an isolated incident and assured that it was not terrorism-related.

A roughly eight-minute fireworks display at the top of seven of the city’s world-famous casino-hotels started at the Stratosphere 10 seconds before midnight Monday and continued to Venetian, Treasure Island, Caesars Palace, Planet Hollywood, Aria and MGM Grand. More than 80,000 pyrotechnic firings that illuminated the sky in gold, red and green.

Megastars performed at venues up and down the Strip. The Foo Fighters played at The Chelsea at The Cosmopolitan, Maroon 5 was at the Mandalay Bay Events Center and Britney Spears performed at The Axis at Planet Hollywood.

Las Vegas police officer Larry Hadfield on Monday said there were no incidents related to the festivities to speak of. The Nevada Highway Patrol on Twitter reported the arrest of two suspected impaired drivers near the Strip.

Police cruisers, dump trucks and other large vehicles blocked key intersections during the night to try to prevent anyone from plowing into crowds.

Strollers, backpacks, large bags, coolers and glass bottles were banned from the Strip for the night. Ticket holders for the celebration on Freemont Street Experienced went through checkpoints where security guards used hand-held metal detectors.

New Year’s Eve is worth an estimated $254.3 million to Las Vegas, according to the city’s Convention and Visitors Authority. More than 97 percent of the destination’s nearly 149,000 hotel and motel rooms were expected to be booked.

Carrier Loans Money to Claimant for Damages, Collects from Negligence Suit Against Broker