When Julia Lundblad lies in bed at night in her Titlow Beach, Wash., home, she can hear the water sloshing up under her house. It took some getting used to, but she loves it.

And she said her neighbors are used to a little water flooding into their kitchens when conditions are right.

“They said, ‘Well, if it comes in, we know it’ll go out again,”‘ Lunbdlad said. “It takes a special soul to live down here.”

Because the small community lies in such intimate proximity to the Puget Sound, homeowners with mortgages have to carry flood insurance. But the cost of that insurance, if you can get it, can be exorbitant. Some homeowners said they’ve been told to expect their monthly premiums to see huge spikes over the next several years.

Almost 280 homes are affected by the map changes, said Sue Coffman, a city building official. She held an informational meeting for homeowners last week to answer questions and help them understand what the changing maps mean.

People with existing homes in those coastal zones are grandfathered in – they don’t have to raise their homes just because the maps now show a higher base flood elevation. But if they do a substantial home remodel or addition, or if the house is destroyed and must be rebuilt, they would have to rebuild at the new elevation, which, depending on the area, can be several feet higher.

Most at the meeting were worried about how and if the higher elevations will affect their insurance rates, because mortgage-holders must have flood insurance in those areas. Lundblad’s next-door neighbor, Chris Nichols, said he pays about $6,500 a year for flood insurance and was told in January the rate will start going up 25 percent every year. 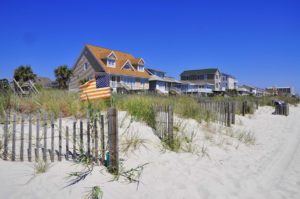 FEMA said that’s because the agency is phasing out flood insurance subsidies for homes, like Nichols’ and others in Titlow Beach and Salmon Beach, that were built before the city adopted its first FEMA flood maps in the 1980s.

In a letter from FEMA, Nichols was told his insurance rates will continue to rise 25 percent a year unless he gets an elevation certificate, which costs about $1,000 but would give FEMA a firm understanding of his actual elevation and of the flood risk. Chances are he is below the base flood elevation, as are most of the houses in Titlow Beach and all of the homes in Salmon Beach, many of which were built in the early 1900s.

“For future work, it could influence insurance rates and, unless they get an elevation certificate, it may affect insurance rates if they can show that where they are relative to the base flood elevation is not as bad as the worst case that the insurance is being based on,” Coffman said.

Pierce County recently adopted FEMA’s updated flood maps as well for unincorporated areas of the county. Municipalities in the county have to adopt the maps separately.

Coffman said the upward creep of insurance premiums is not a Tacoma problem – it’s everywhere. FEMA is trying to recoup losses it incurred in the wake of major weather events.

“After Hurricane Katrina, they’ve been slowly increasing the insurance rates, so everyone is seeing increases in flood plain insurance,” Coffman said. “It’s my understanding that they’re trying to get insurance rates closer to where they should be and not so subsidized.”

Dave Peterson, a 30-year Salmon Beach resident who works as a real estate broker, said the new maps and climbing insurance rates are going to make it harder and harder to sell houses in those coastal areas.

Peterson said it will be a game-changer. When a potential buyer finds out they must have flood insurance and researches the cost of premiums – a number that will only trend up – it may have a negative impact on home values. Cash buyers are an option, because they wouldn’t have to have flood insurance, but they’re not as easy to come by.

Peterson said, for those planning to sell their homes, the increase in base flood elevation is cause for concern.

Lenders may be hesitant to offer mortgages in places where homes are below the base flood elevation. Lundblad doesn’t have a mortgage and owns her home outright, so she doesn’t have to have insurance, and she doesn’t right now – it was too expensive. So she lives with the risk of something happening to her home and not being covered.

Lundblad said she couldn’t get a clear answer on whether FEMA or private flood insurance would even cover events like tidal waters rushing into her house. When shopping for insurance, Lundblad was told the policy wouldn’t cover tidal overflow or flooding caused by high tides. Insurance was too pricy, she said, given that she wasn’t sure she’d be covered if the Sound flooded her house.

Nichols said the rising cost of insurance has been a big concern.

“I think it’s going to get either more expensive to the point where it’s just not feasible – right now my backup plan is to empty my 401K and buy out my mortgage so that I can drop my insurance,” he said, “but I would rather not do that if I don’t have to.”