A $24 billion sea of red ink has millions of Americans in vulnerable flood zones, including homeowners still struggling to recover from Superstorm Sandy, facing steep increases in flood insurance premiums.

New legislation that went into effect this month – the second time in two years Congress has tweaked the troubled National Flood Insurance Program – allows rate increases of up to 18 percent.

“This appears to be death by a thousand cuts,”‘ said Scott Primiano, an Amityville, New York, insurance broker who has been holding seminars for clients to explain the new legislation. “The concept sounds good, but no one can say what the full risk is. … They are going to take it in bits and pieces every year and it keeps going until Congress determines we’ve had enough.”

Federal Emergency Management Agency spokesman Rafael Lemaitre said the flood insurance program has for decades been paying out more than it took in, with the United States as a whole totaling more than $260 billion in flood-related damages between 1980 and 2013. He said the new legislation is “intended to improve the long-term sustainability of the program while being sensitive to needs of policyholders.”

Lemaitre noted that a previous overhaul in 2012 had socked many policyholders with even higher rate hikes – as much as 25 percent annually. 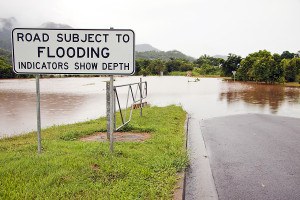 In addition to rate increases capped at 18 percent annually for those with mortgages living in high-risk flood regions, the new legislation means all flood insurance customers nationwide will pay at least a $25 surcharge on their annual premiums. And homeowners with a “secondary residence,” such as vacation properties, will pay a $250 surcharge.

The law gives FEMA 18 months to complete a study on flood insurance affordability and up to 36 months to find a way to offer targeted assistance to policyholders who can’t afford high premiums. Congress also said FEMA should set a goal of limiting annual premiums to no more than $2,500 per year for $250,000 in coverage, but didn’t offer any suggestions on how to do that.

Tom Daniels, a 66-year-old retiree from Lindenhurst, New York, said his home had 3 1/2 feet of water after Sandy struck, and received $97,000 in insurance to pay for the damage. He said his flood insurance rates are up $600 a year, and now pays more than $2,800 annually.

“I had a feeling they were going to go up,” he said. “I think I’m one of the lucky ones because I only have to pay $50 a month more. I understand that and we’re grateful for what we’ve got.”

Susan Goldstone said she is still struggling to assist her parents in their attempts to get their Oceanside, New York, home repaired after Sandy flooded up to 8 feet of their house.

“We’re still paying for flood insurance, but we’re still not back in the house,” she said. “How do they expect people to stay in their home? It’s crazy high and then you have to deal with the taxes. When does it end? There must be some other alternative.”