A bill that would require school buses to have seatbelts is being considered by lawmakers in Washington, one of more than a dozen states where school seatbelt measures are on the legislative agenda this year.

The Senate Transportation Committee held a public hearing Tuesday for Senate Bill 5054. It would mandate that all public and private school buses purchased after the bill takes effect have a safety belt for each rider.

California, Florida, Louisiana, New Jersey, New York and Texas have existing variations of a seat beltlaw for school buses, according to the National Conference of State Legislatures. At least 17 states, including Washington, have introduced legislation regarding seatbelts on school buses in the 2017 sessions.

According to the National Highway Traffic Safety Administration approximately 23.5 million children use school buses to get to and from school and school-related activities. On average, six school-age children die each year in school bus crashes as passengers.

“It’s really the safest way for occupants to ride and it comes down to the bottom line of seatbelts save lives and we’ve known this for years,” Terry said in an interview. “There’s no reason, especially when people are looking at purchasing new buses, why they shouldn’t try to get ones with this type of common sense safety equipment on board.” 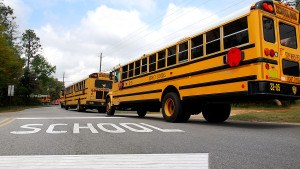 Terry said from the time a child is born they are placed in a car seat and are taught to buckle up in a car, but for some reason a school bus is treated differently.

“A school bus should not be a time where you say ‘it’s OK you don’t need to buckle up this time,”‘ she said.

Republican Sen. Michael Baumgartner, a member of the Transportation Committee, referenced a time when his son, a kindergartener, was surprised when he didn’t have to wear a seatbelt on a school bus to a field trip.

“We shouldn’t be having tragedies where kids are killed because they don’t have the option of putting on a seatbelt,” Baumgartner said.

A former school bus driver, Brian Lang, opposed the bill at the hearing.

“The idea is a good one; however, as a driver it is the driver’s responsibility to ensure that all of the passengers in the bus remain buckled up,” Lang said.

Lang said it can be challenging to keep 5-year-olds strapped in their seatbelts, but the hardest part of all is, “You can’t see them.”

“It’s going to be difficult for one driver to control,” he said.

Baumgartner said the responsibility should be taken off the drivers in some way.