Rock-shattered windshields are such a common occurrence on Arizona roads that insurance companies have long been required to replace broken glass for free to drivers with full coverage policies.

It ends up being a big expense to insurance companies that have to pay all the claims, and now they want to eliminate the requirement.

It is the latest effort by the insurance industry that targets auto glass repair companies. Auto glass replacement firms are everywhere in the state because of the high rate of breakage due to heat and rocks and guaranteed free replacement.

Arizona Auto Glass Association President Rex Altree said Monday that drivers will forego fixing cracked windshields that are safety hazard if the bill passes. He also says hundreds of companies could go out of business, and it could costs thousands of jobs.

Altree runs a Tempe-based auto glass replacement company, SafePro Auto Glass. He said the state’s extreme heat makes glass easier to crack or chip and that, combined with the prevalence of rocks in the desert landscape, leads to much of the breakage.

Altree said there’s more broken windshields in Arizona “because we live in an area where we rake our gravel and we don’t rake our grass.”

He called free replacement a convenience for consumers and also a safety issue. Driving with a broken or cracked windshield is illegal. And he said insurers can and many do charge extra premiums for the coverage.

“It’s just an offer, and we’re just asking them to continue offering it,” Altree said of insurance companies.

Fann said there’s too much fraud in the glass replacement industry, with small repairs being boosted to complete replacements and kickbacks being given to customers.

“The fraud statutes that are on the books do not even come close to dealing with the problems that we have with the auto glass industry,” Fann said Monday. “My bill is simply a pro-business bill, it is simply a fraud reduction bill.”

Lobbyist Marc Osborn, who represents several insurers and the industry group Property Casualty Insurance Association of America, said they’re pushing for the change because zero-deductible glass replacement has led to widespread overutilization and fraud. Signs that offer cash for windshield replacement are a common sight on Arizona roads, drawing complaints from insurance companies that unscrupulous companies are offering cash back to customers so they can submit overly-high bills. 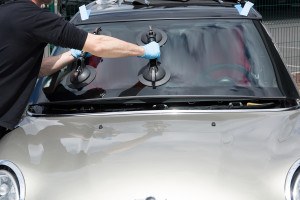 And Osborn noted that the eight states that require zero-deductible glass replacement make up 88 percent of all glass claims nationwide.

“By kind of artificially mandating that you offer something, it has a corrupting influence on the utilization,” Osborne said. “It ends up costing all consumers more because the coverage will be inherently more expensive if you have this kind of rampant abuse and overutilization that is occurring.”

Consumers benefit from the plans because they don’t put off replacing broken windshields or lights with the coverage, glass company lobbyist Barry Aarons said. Insurers, he said, aren’t going out of business because of the coverage. He also said there’s plenty of anti-fraud laws already on the books if there really is a problem.

The insurance industry tried and failed last year to get the Legislature to ban rebates to consumers from auto glass companies and put in place other new regulations.