The use of opioids in California workers’ compensation has declined in recent years, along with the associated payments, yet these potentially addictive painkillers remain the number one therapeutic drug group used in the system according to a new California Workers’ Compensation Institute (CWCI) study. 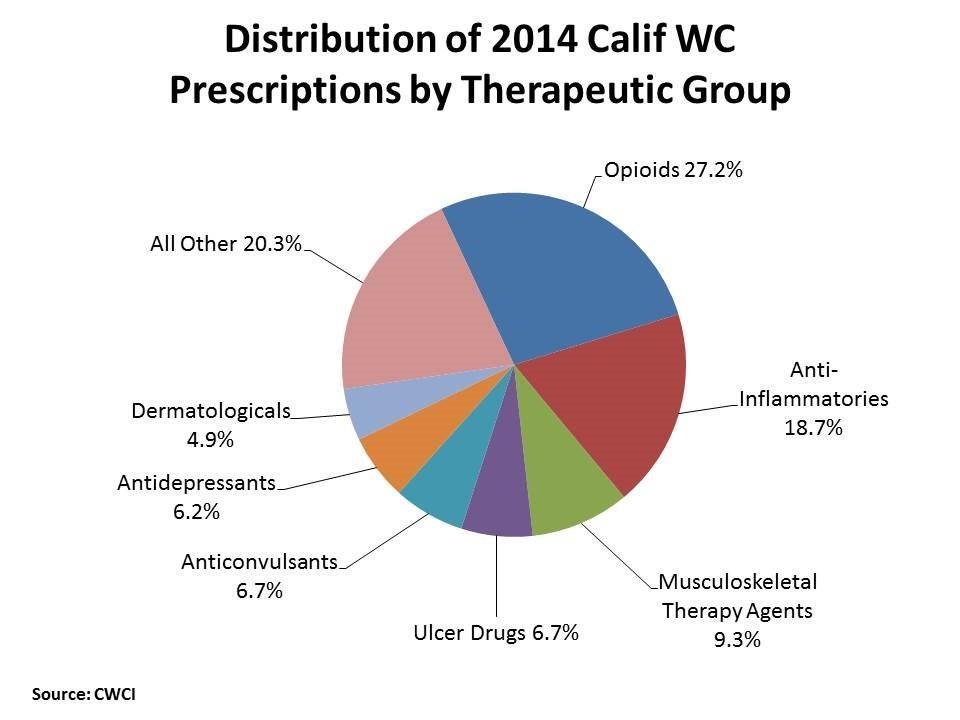 The CWCI research, based on pharmaceutical data from 10.8 million prescriptions dispensed to California injured workers from 2005 through 2014, identifies trends in the volume, cost, potency and types of opioids used in workers’ comp over the past decade. Opioids increased from 27.0 percent of all workers’ comp prescriptions filled in 2005 to 31.8 percent in 2009, but then retreated to 27.2 percent in 2014. That pattern was mirrored in the payment data, which showed opioid reimbursements as a proportion of total workers’ comp drug spend rose from 19.3 percent in 2005 to a peak of 31.9 percent in 2009 before falling back to 24.4 percent in 2014. The decline in opioid use accelerated in 2012, which coincides with increased scrutiny by utilization review and independent medical review programs and restrictions imposed by pharmacy benefit managers, medical provider networks and payors, but even with the declining use over the past 5 years, opioids remain the number one therapeutic drug group in California workers’ comp in both use and payments.

The distribution of 2014 California workers’ compensation medications by therapeutic group shows opioids accounted for more than a quarter of the prescriptions dispensed to injured workers, well ahead of anti-inflammatories, which accounted for nearly 1 out of 5 prescriptions, followed by musculoskeletal therapy agents, ulcer drugs, anticonvulsants, antidepressants and dermatologicals. All other therapeutic groups together accounted for 20.3% of the 2014 prescriptions, but none of those individual groups represented more than 2.5% of the drugs dispensed in 2014.

Other analyses in the study examine brand vs. generic opioid drug trends; changes in average payments for opioid and non-opioid drugs; the percentage of injured workers who received opioids at various points in the life of a claim; the number of opioid prescriptions per user and how that has evolved over time; and changes in the potency of opioids used in workers’ comp, as measured by the average morphine milligram equivalents per prescription as well as the average morphine equivalents per opioid user.

The results of the study have been released in a CWCI Research Note, “Trends in the Use of Opioids in the California Workers’ Compensation System,” available at www.cwci.org/research.html.