The Diablo Canyon nuclear power plant, located in San Luis Obispo County, Calif., and earthquake faults have been uneasy neighbors for decades. Even before the twin reactors produced a single watt of electricity, the plant had to be retrofitted after a submerged fault was discovered 3 miles offshore during construction. 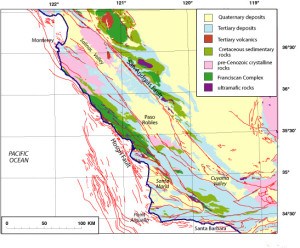 That cleft in the earth, known as the Hosgri fault, has long been considered the greatest seismic threat to a plant that stands within a virtual web of faults. But new questions are being raised by sophisticated seafloor mapping that has found that the Hosgri links to a second, larger crack farther north, the San Gregorio fault.

In general, the longer the fault, the stronger its potential shaking power. Together, the two faults create a strand about 250 miles long, more than double the length of the Hosgri alone.

Scientists long speculated the two faults were entwined. But Sam Johnson, a research geologist with the U.S. Geological Survey, said it’s not yet known whether the Hosgri-San Gregorio system might have breaks in its structure that could limit a full rupture during an earthquake.

The huge San Andreas fault, which slices across California, is thought to have distinct north and south sections that would not shake simultaneously, he noted.

Also, the length of the crack can affect how often earthquakes occur – longer faults increase the probability of larger, but less frequent, temblors.

Research being led by federal agencies is continuing. Scientists advising plant owner Pacific Gas and Electric Co. have said the twin-domed reactors could withstand shaking from the largest potential earthquake that could come from the Hosgri, which was discovered in the early 1970s.

Company spokesman Blair Jones said in a statement that experts have evaluated a potential rupture linking the Hosgri with several other faults, including the San Gregorio fault and the northern San Andreas fault. Scientists have found the prospect of that scenario occurring is extremely unlikely, he said.

Ground shaking from such a quake could be 20 percent larger than movement on the Hosgri alone, when measured in the shaking range that could impact plant safety. But critical systems and components needed to shut down the plant could withstand the additional stress, Jones said.

Earlier this year, the Nuclear Regulatory Commission directed Diablo Canyon to conduct additional, in-depth analysis on earthquake risks by June 2017, part of a broad review of seismic threats following Japan’s Fukushima Dai-ichi disaster. The agency found that among commercial U.S. nuclear plants, the California plant is among those that face the highest hazard when potential strong ground shaking is evaluated against the plant design.