Super Bowl Sunday is among the most dangerous days to venture onto California roads as gatherings for the game at parties or restaurants prompt drivers to consume alcohol.

More drinking-related crashes happen in California on the day of the National Football League championship than on any other Sunday in January and February, according to a statement distributed Monday by the state’s insurance department. Game day carries a 77 percent increased risk of alcohol-linked fatal and injury crashes. This year’s Super Bowl is set for Feb. 1. 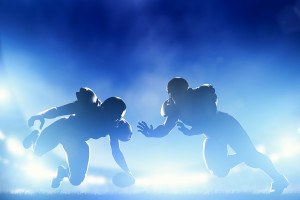 “Super Bowl Sunday is the biggest one-day sporting event in the United States and unfortunately one of the most dangerous days on California’s roads and highways,” Insurance Commissioner Dave Jones said in the statement. “Every one of us has a responsibility to ensure we do not contribute to the problem by allowing a drunk or drugged driver to hit the road.”

There were 294 alcohol-related fatal and injury crashes in California on Super Bowl Sundays from 2009 to 2013, an average of about 59. That compares with about 33 for other Sundays in January and February. The game is one of the most-watched televised events of the year.

The data was compiled by the California Highway Patrol and analyzed by the Automobile Club of Southern California. The auto club is offering free tows from 6 p.m. on Super Bowl Sunday through 6 a.m. the next morning to help prevent drinking and driving.

“People think, ‘I’m just a little buzzed,’” Nancy Kincaid, a spokeswoman for the insurance department, said by phone. “A little buzzed is drunk, and you’re an impaired driver.”

This year’s Super Bowl features the defending champion Seattle Seahawks against the New England Patriots. The game will be played in Glendale, Arizona.