Courts in the State of Washington always present interesting appellate issues in the bad faith context. One of those interesting issues can be seen in the Washington Court of Appeals decision of Miller v. Kenny, 325 P.3d 278 (Wash. Ct. App. 2014).

In Miller, three automobile accident victims (passengers) sued the insured driver. The parties executed a settlement agreement by which the insured agreed to pay $1.8 million in insurance proceeds to the passengers, to enter a reasonable covenant judgment, and to assign to one of the passengers, the insured driver’s rights to sue the insurer for bad faith and related claims. The automobile insurer intervened at which time the parties stipulated that $4.15 million was the reasonable total net amount of the covenant judgment that remained unpaid after the passengers received the $1.8 million insurance proceeds. The assignee passenger then dropped his claims against the insured driver and amended the complaint to allege bad faith against the insurer. Ultimately, a jury returned a verdict of $13 million.

The insurance company, Safeco Insurance Company (Safeco), as the intervener, argued on appeal that plaintiff’s counsel’s closing argument resulted in a verdict that was the product of passion and prejudice and that a new trial should be granted on that basis. Prior to trial, Safeco had moved in limine to preclude plaintiff’s counsel from making a “golden rule” argument or a “send-a-message” argument to the jury. 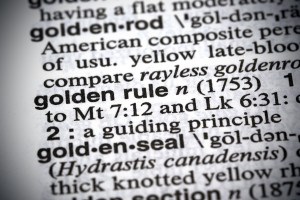 As the Court described it “A golden rule argument urges jurors to imagine themselves in the position of a party and to grant that party the relief they would wish to have for themselves.”

The Court of Appeals stated that “[t]he vice of a golden rule argument is that it encourages the jury to ‘depart from neutrality and to decide the case on the basis of personal interest and bias rather than on the evidence.’” Citing Adkins v. Aluminum Co. of America, 110 Wash.2d at 139, 750 P.2d 1257, 756 P.2d 142 (emphasis added), quoting Rojas v. Richardson, 703 F.2d 186 191 (5th Cir. 1983). According to the Washington Court, the plaintiff’s counsel did not appeal to juror self-interest; rather, plaintiff’s counsel appealed to the jurors’ interest as members of the public to “protect the public interest” and to enforce the public “compact” that insurance companies have to comply with their duties of reasonable care, good faith and fair dealing under the law. Therefore, it was not an improper argument to be used in a bad faith case.

The Court reiterated that Safeco did not make a timely objection. The challenge remarks, according to the Court, when read in the overall context of the trial, were more properly characterized as aggressive advocacy than as misconduct.