Due to global warming, scientists say, the chances of the southwestern United States experiencing a decade long drought is at least 50 percent, and the chances of a “megadrought” – one that lasts over 30 years – ranges from 20 to 50 percent over the next century. 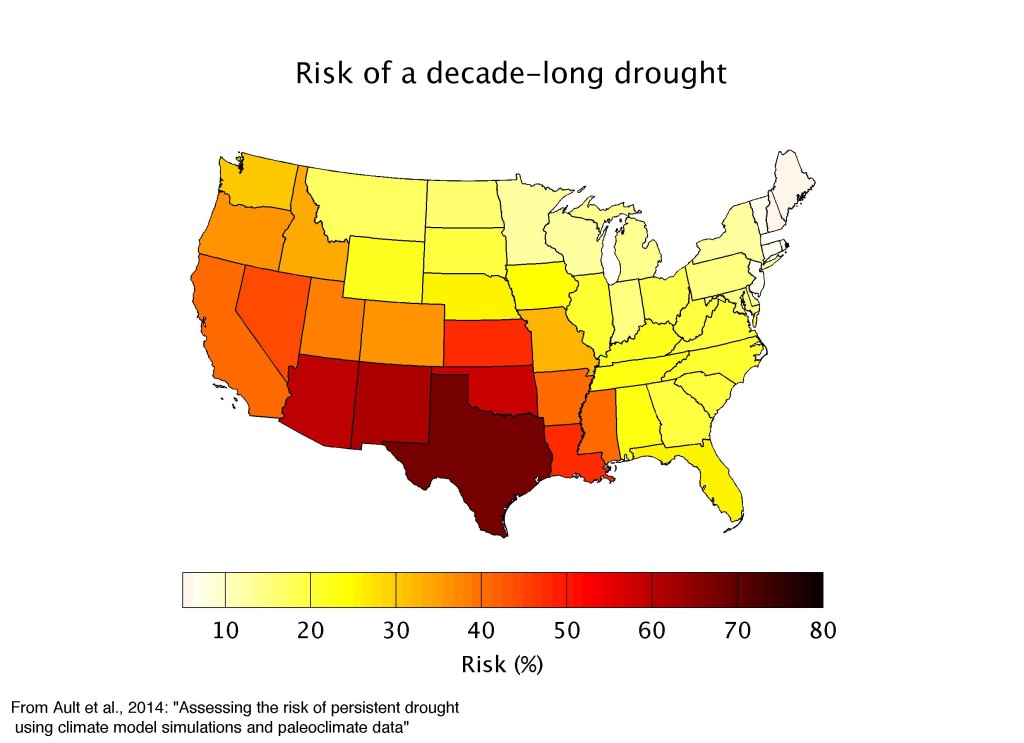 The study by Cornell University, University of Arizona and U.S. Geological Survey researchers will be published in a forthcoming issue of the American Meteorological Society’s Journal of Climate.

“For the southwestern U.S., I’m not optimistic about avoiding real megadroughts,” said Toby Ault, Cornell assistant professor of earth and atmospheric sciences and lead author of the paper. “As we add greenhouse gases into the atmosphere – and we haven’t put the brakes on stopping this – we are weighting the dice for megadrought conditions.”

As of mid-August, most of California sits in a D4 “exceptional drought,” which is in the most severe category. Oregon, Arizona, New Mexico, Oklahoma and Texas also loiter between moderate and exceptional drought. Ault says climatologists don’t know whether the severe western and southwestern drought will continue, but he said, “With ongoing climate change, this is a glimpse of things to come. It’s a preview of our future.”

Ault said that the West and Southwest must look for mitigation strategies to cope with looming long-drought scenarios. “This will be worse than anything seen during the last 2,000 years and would pose unprecedented challenges to water resources in the region,” he said.

In computer models, while California, Arizona and New Mexico will likely face drought, the researchers show the chances for drought in parts of Washington, Montana and Idaho may decrease.

Beyond the United States, southern Africa, Australia and the Amazon basin are also vulnerable to the possibility of a megadrought. With increases in temperatures, drought severity will likely worsen, “implying that our results should be viewed as conservative,” the study reports.

“These results help us take the long view of future drought risk in the Southwest – and the picture is not pretty. We hope this opens up new discussions about how to best use and conserve the precious water that we have,” said Julia Cole, UA professor of geosciences and of atmospheric sciences.

The National Science Foundation, National Center for Atmospheric Research, the U.S. Geological Survey and the National Oceanic and Atmospheric Administration funded the research.