The disastrous March 22 landslide that killed 43 people in the rural Washington state community of Oso involved the “remobilization” of a 2006 landslide on the same hillside, a new federally sponsored geological study concludes.

The research indicates the landslide, the deadliest in U.S. history, happened in two major stages. The first stage remobilized the 2006 slide, including part of an adjacent forested slope from an ancient slide, and was made up largely or entirely of deposits from previous landslides. The first stage ultimately moved more than six-tenths of a mile across the north fork of the Stillaguamish River and caused nearly all the destruction in the Steelhead Haven neighborhood.

The second stage started several minutes later and consisted of ancient landslide and glacial deposits. That material moved into the space vacated by the first stage and moved rapidly until it reached the trailing edge of the first stage, the study found.

The report, released Tuesday on the four-month anniversary of the slide, details an investigation by a team from the Geotechnical Extreme Events Reconnaissance Association, or GEER. The scientists and engineers determined that intense rainfall in the three weeks before the slide likely was a major issue, but factors such as altered groundwater migration, weakened soil consistency because of previous landslides and changes in hillside stresses played key roles.

The extreme events group is funded by the National Science Foundation, and its goal is to collect perishable data immediately in the wake of extreme events such as earthquakes, hurricanes, tsunamis, landslides or floods. Recent events for which reports have been filed include earthquakes in New Zealand and Haiti, the 2011 earthquake and tsunami in Japan, and Hurricane Sandy on the U.S. Eastern Seaboard in 2012. 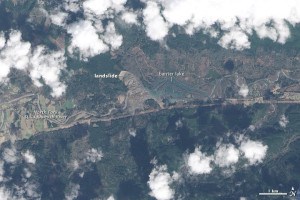 “Perhaps the most striking finding is that, while the Oso landslide was a rare geologic occurrence, it was not extraordinary,” said Joseph Wartman, a University of Washington associate professor of civil and environmental engineering and a team leader for the study.

“We observed several other older but very similar long-runout landslides in the surrounding Stillaguamish River Valley. This tells us these may be prevalent in this setting over long time frames. Even the apparent trigger of the event – several weeks of intense rainfall – was not truly exceptional for the region,” Wartman said.

Team co-leader Jeffrey Keaton, a principal engineering geologist with AMEC Americas, an engineering consultant and project management company, said another important finding is that spring of 2014 was not a big time for landslides in Northwest Washington.

“The Oso landslide was the only major one that occurred in Snohomish County or the Seattle area this spring,” Keaton said.

The team was formed and approved within days of the landslide, but it began work at the site about eight weeks later, after search and recovery activities were largely completed. The researchers documented conditions and collected data that could be lost over time. Their report is based largely on data collected during a four-day study of the entire landslide area in late May. It focuses on data and observations directly from the site, but also considers information such as local geologic and climate conditions and eyewitness accounts.

The researchers reviewed evidence for a number of large landslides in the Stillaguamish Valley around Oso during the previous 6,000 years, many of them strongly resembling the site of the 2014 slide. There is solid evidence, for example, of a slide just west of this year’s slide that also ran out across the valley. In addition, they reviewed published maps showing the entire valley bottom in the Oso area is made up of old landslide deposits or areas where such deposits have been reworked by the river and left on the flood plain.

The researchers found that the size of the landslide area grew slowly starting in the 1930s until 2006, when it increased dramatically. That was followed by this year’s catastrophically larger slide.

Studies in previous decades indicated a high landslide risk for the Oso area, the researchers found, but they noted that it does not appear there was any publicly communicated understanding that debris from a landslide could run as far across the valley as it did in March. In addition to the fatalities, that event seriously injured at least 10 people and caused damage estimated at more than $50 million.

“For me, the most important finding is that we must think about landslides in the context of ‘risk’ rather than ‘hazard,'” Wartman said. “While these terms are often used interchangeably, there is a subtle but important difference. Landslide hazard, which was well known in the region, tells us the likelihood that a landslide will occur, whereas landslide risk tells us something far more important – the likelihood that human losses will occur as a result of a landslide.

“From a policy perspective, I think it is very important that we begin to assess and clearly communicate the risks from landslides,” he said.

Other study conclusions include:
• That past landslides and associated debris deposited by water should be carefully investigated when mapping areas for zoning purposes.
• That the influence of precipitation on destabilizing a slope should consider both cumulative amounts and short-duration intensities in assessing the likelihood of initial or renewed slope movement.
• That methods to identify and delineate potential landslide runout zones need to be revisited and re-evaluated.