State officials say it’s not easy to prevent people from falling and injuring themselves on escalators, even when they’re working properly.

Nobody knows that better than the people who run Seattle Tacoma International Airport.

The airport has more escalators than any other location monitored by the state, The News Tribune reported.

State records show that between 2008 and early 2014, there were 175 injury accidents on the airport’s 79 escalators. That’s more than half of the 318 escalator accidents reported statewide during that time period. 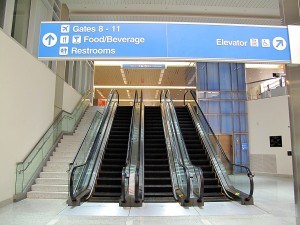 Mechanical problems have been blamed in only three escalator-related injuries since 2008 at Sea-Tac Aiport. Inspection reports show wheeled luggage was responsible for most of the other accidents.

People fall on airport escalators with luggage so frequently that state inspectors have repeatedly recommended that Sea-Tac add signs directing people away from escalators and toward elevators.

The Port of Seattle – which runs the airport – has adjusted its signs in some areas, but not others.

Sea-Tac officials say there’s only so much they can do to encourage people to take elevators if they’re carrying too many things, or are otherwise physically impaired.

“We have people focused on getting where they want to go really fast,” said Stuart Mathews, general manager of aviation maintenance at the airport. “That’s really the much harder piece to deal with on this: the human element.”

In some places, adding signs can cause people to stop abruptly, creating additional traffic flow problems, Mathews said. And it wouldn’t be physically possible to move everybody through the airport using the airport’s 82 elevators, he said.

Even so, state officials would like to see port officials do more, such as putting warning signs on the floor, or adding more overhead announcements advising people to take elevators if they can’t hold the escalator hand rail, said Jack Day, Labor & Industry’s chief escalator and elevator inspector.

“People are going to do it anyway,” Day said.