Work on the drywall portion of the $150 million, 45-story Pinnacle Towers construction project in downtown San Diego has stopped after the Contractors State License Board (CSLB) determined the sub-contractor hired for the work, Clayton Wall & Ceiling Systems Inc. (Clayton), is not properly licensed in the state of California.

On April 4, 2014, investigators with CSLB, California Department of Industrial Relations (DIR), and the San Diego District Attorney’s Office, responded to an industry lead and performed an unannounced inspection of the construction site at 1443 Island Avenue. 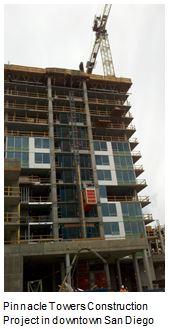 The primary contractor, Pinnacle International Development Inc., contracted with Clayton on in August 2013 for the $6.34 million drywall job. The company, based in Kelowna, British Columbia, applied for a California Contractors license on December 3, 2013. Investigators determined that drywall work began in January 2014, even though the company has not yet completed the licensing process.

CSLB issued an administrative citation to Clayton Wall & Ceiling Systems Inc. for acting in the capacity of a contractor and a civil penalty of $15,000.

Clayton’s license application is on hold until the fines are paid or until an appeal is heard. That will delay the company’s ability to work on the San Diego project, or any other project in the state. Pinnacle may face administrative action for contracting with a non-licensee.

The Labor Commissioner’s investigation of the business remains active.