Hackers breached the websites of all Las Vegas Sands Corp. websites Tuesday morning, and the home pages of some of the world’s largest casinos remained down through the day.

The Nevada State Gaming Control Board was investigating the breach, and the FBI was also aware of the matter. 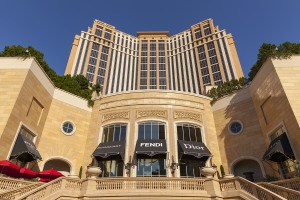 Patrons got error messages when they tried to visit the home pages of the Venetian casino, famous for its ersatz canals, and the Palazzo casino, which is next door on the Las Vegas Strip. The company’s corporate site was also hacked, as were websites for Sands casinos in Bethlehem, Pa., Singapore, and the Chinese gambling enclave of Macau.

Las Vegas Sands spokesman Ron Reese said the company was working with law enforcement to determine who was behind the hacking, and assessing the damage. The company could not say whether customer credit-card records had been breached.

Last December, Las Vegas-based casino operator Affinity Gaming announced that its credit-card transactions had been hacked and warned its 300,000 customers to take steps to protect themselves from identity theft.

FBI spokeswoman Jenny Shearer confirmed that the agency was aware of the problems with the Sands sites, but she declined to say whether the FBI had launched an investigation. Las Vegas police spokesman Larry Hadfield said he was not aware of the issue.

The Morning Call in Allentown, Pennsylvania, posted screenshots of the sites before they were taken down that showed a picture of Sands CEO Sheldon Adelson posing with Israel Prime Minister Benjamin Netanyahu and a message condemning the use of weapons of mass destruction.

The sites featured a list of confidential employee information and Social Security numbers, according to the Morning Call.

The hackers also disrupted some of Sands’ internal systems, leaving employees without access to their company email accounts.

Adelson, who is known for having a fiery personality, has been outspoken in his support for Israel.

In October, he floated the idea of dropping a nuclear bomb on Iran, saying strength was the only thing the country understands. During a forum at Yeshiva University in New York City, he imagined what might happen if the U.S. began negotiations over the country’s nuclear program by launching a strike on the Iranian desert.

“Then you say, ‘See! The next one is in the middle of Tehran. So, we mean business. You want to be wiped out? Go ahead and take a tough position and continue with your nuclear development,'” he said.

The hackers, who signed their work “Anti WMD Team,” may be “hacktivists,” or people who attack websites to send a political message.

In 2010, the loosely-affiliated group Anonymous hacked major credit card sites, including Visa Inc., after the companies declined to process donations to WikiLeaks. In 2012, hackers targeted Sony Corp. in response to company’s support for anti-piracy measures.

Other Las Vegas-based casino companies reported no problems with their sites Tuesday.