Alaska officials have released a tsunami inundation map for Sitka, showing the estimated high-water mark in the event of a tsunami.

But Sitka Fire Chief Dave Miller said not to take the map as the final word on how high the water might rise in a tsunami. 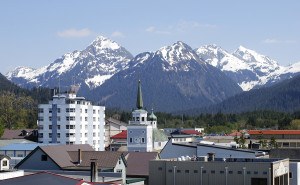 “This tells us what the computer-generated study has found,” said Miller, the city’s emergency coordinator.

The map from the state Department of Natural Resources Division of Geological and Geophysical Surveys shows the “maximum estimated tsunami inundation” with a red line that roughly borders the beach side of the HPR and Sawmill Creek Road road system and encompasses the downtown areas seaward of Lincoln Street and Katlian Street.

Different color shadings show the predicted maximum water levels in each area of town in the event of a tsunami. The color tints over the low-lying downtown area, including city hall, Kettleson Library and Centennial Hall, indicates a maximum inundation of three to six feet.

The University of Alaska Southeast ramp shows a maximum of six feet inundation, and the APC mill site shows levels of three to six feet. The highest levels on the map are the estuary at the Sitka National Historical Park and the Eliason Harbor parking lot, both showing a maximum 15 foot inundation, Miller said.

“Everywhere else it varies to up to six feet,” he said.(backslash)

Miller said the process for creating inundation maps for all Alaskan communities vulnerable to a tsunami started in 2001, and is a joint effort by the National Oceanic and Atmospheric Administration, University of Alaska Fairbanks, state Division of Homeland Security and Emergency Management, and DNR.

He noted that these are estimations only, based on a computer model, and shouldn’t be used exclusively for emergency planning.

“Nature has a different way of doing things,” Miller said. “She doesn’t always look at a computer.”

The city has evacuation routes to Sitka High School and Keet Gooshi Heen Elementary, but Miller said there are many suitable evacuation areas – including private residences – on higher ground.

Miller noted that the computer model is interesting to check out and see where the predicted inundation areas are. But he cautioned that there are many unknowns in natural disasters. He added that the tsunami in Japan in March 2011 caused damage much greater than anyone’s expectation. “It wasn’t exactly what they planned,” he said.

The process of getting people prepared is ongoing in Sitka.

“We’re always preaching to people to have a seven-day survival kit,” Miller said, as well as an evacuation plan for where everyone in the family should go.

The Sitka inundation map is available at www.dggs.alaska.gov/pubs/id/26671. Miller said everyone is invited to stop by the fire hall to get a close look at the large tsunami inundation map on his wall.