State officials say construction delays and redesign costs could use up the Highway 520 bridge’s $100 million in reserves and eventually send the project another $128 million into the red, The Seattle Times reported in Saturday’s newspaper.

Most of the costs are related to design errors by the state Department of Transportation (DOT) that caused cracks in the first four giant pontoons. These required repairs, while others have been redesigned. 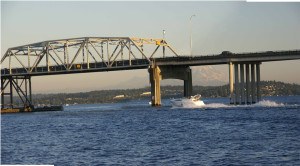 The estimate for when the floating bridge will be completed has also changed – from late 2014 to April 2016.

The state doesn’t have concrete plans for finding more money if the project requires it.

An Aug. 16 letter from Peterson instructs the 520 team to look for cost savings, negotiate aggressively and work with the state treasurer’s office on financing options.

DOT spokesman Lars Erickson said $228 million is the upper end of estimated cost overruns and the DOT will try to negotiate downward from there with contractors, including Kiewit, the primary partner for the floating section of the bridge.

The DOT has money to proceed through mid-2014 while it makes plans for the rest of the project.

State lawmakers failed to pass a new 10-year highway package before they went home this year, and the latest news makes that a tougher sell for DOT, said state Rep. Ed Orcutt of Kalama, the ranking Republican on the House Transportation Committee.

“If they want a gas tax, to build more projects, they’ve got to get things right. They’ve lost a lot of trust,” he said.

Orcutt said he doesn’t know how to react if the 520 fund “goes negative.” Conceivably, if some other project is done under budget, money could be shifted around, he said.

House Transportation Chairwoman Judy Clibborn, D-Mercer Island, tried to allocate at least $100 million more for 520 in the failed package in the spring, and could be expected to try again.