Authorities are looking into whether a tour bus driver bound for Las Vegas violated what’s popularly known as Arizona’s “Stupid Motorist Law” when he drove into a flooded wash after a trip to the Grand Canyon’s west rim. 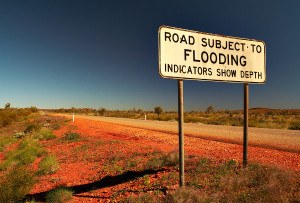 Flash floodwaters swept the bus -with 33 people aboard – hundreds of yards down a northwestern Arizona wash Sunday. The vehicle flipped on its side onto an embankment, and the passengers escaped on their own uninjured.

Mohave County sheriff’s spokeswoman Trish Carter said Monday that authorities are determining whether a 1995 law requiring that drivers pay for emergency response when they enter flooded areas applies in this situation.

“A lot of people will cross when it’s an inch or two or three. I can’t say whether it was that low or not,” she said. “The bus saw a passenger vehicle go through. I’m sure I’m thinking ‘the bigger I am, the more I can do.”‘

Bessy Lee, marketing manager for the bus owner, C.H. Destination in Las Vegas, said charging the driver under the law would be an insult. She said Joseph Razon, 52, had no warning about danger through signage or traffic control and made a careful choice to cross the water.

Lee noted that no one was hurt and said the company hadn’t received any warning about the possibility of flash flooding in the area.

But the company official added that the firm, which has done business since 2007 as Canyon Coach Lines, would improve training “to prevent future issues of this kind.”

It’s questionable whether the “Stupid Motorist Law” would apply because the area wasn’t barricaded, and another section requires that a person be convicted of reckless driving before having to pay up to $2,000 for emergency response or rescue operations.

The bus company paid to tow the bus from the site and sent another bus to retrieve the passengers. Lee said the damaged bus was new, in service for just three months and cost $600,000.

Firefighters, paramedics and law enforcement from the surrounding communities responded to the scene about 1:50 p.m. Sunday. Other emergency responders were called off after it was determined that the passengers had reached dry land safely.

Any decision whether to file charges would be made by the Mohave County attorney’s office.

The National Transportation Safety Board wasn’t planning to investigate the crash, said Kelly Nantel, a spokeswoman for the federal agency. Nantel said the board focuses when it can on serious accidents and emerging or new safety issues.

Razon had taken the tourists to the Hualapai reservation on the Grand Canyon’s west rim, where a horseshoe-shaped glass bridge juts out from the canyon’s walls. The company runs multiple tour buses per day to the popular tourist destination.

The drive to and from Las Vegas is about 125 miles, and takes 21/2 hours over paved and dirt roads.

Permanent signs to and from the turnoff to the Grand Canyon Skywalk on Pierce Ferry Road warn drivers that washes may become flooded, he said.

“That sign is very prominently displayed, it’s maintained in good condition,” he said. “I would have every expectation that sign would have been visible to the driver. He passed the sign, absolutely.”

The National Weather Service had issued a flash flood warning just before noon Sunday for Mohave County because of thunderstorms in the area, meteorologist Chris Stumpf in Las Vegas said. The warning was extended twice, before it was allowed to expire at 4:15 p.m.

The warning specifically referred to roads that take tourists to and from the Grand Canyon Skywalk, Stumpf said. Sheriff’s deputies had reported water on the roadway at about 1:15 p.m., he said.

Lee said it wasn’t raining when Razon stopped the bus and, along with the tour leader, gauged whether it was safe to cross the watery wash. They saw other vehicles make it across before Razon began to slowly drive through the water.

“He was protecting the passengers and the bus,” Lee said. “Just as he was halfway, that’s when the flood of mud and water smacked into the side of the bus and washed it 300 yards down.”

Efforts to reach Razon weren’t immediately successful. Lee said she spoke with company chief David Huang and Razon, and she would not make Razon available for an interview.

A company official said Razon has worked for the company since 2005 and had a clean driving record. Arizona court records show that Razon pleaded guilty to speeding on U.S. 93, the highway that dozens of tour bus companies from Las Vegas take daily to the Skywalk, while operating one of the company’s buses.