An elite team of 19 firemen were killed on Sunday in one of deadliest U.S. firefighting disasters in decades as flames raced through dry brush and grass in central Arizona, destroying scores of homes and forcing the evacuation of two towns.

It was the greatest loss of life among firefighters from a single wildland blaze in the United States in 80 years, since 29 men died battling the Griffith Park fire of 1933 in Los Angeles, according to National Fire Protection Association records.

Art Morrison of the Arizona State Forestry Commission told CNN the firefighters, members of a specially trained “hot shot” team who serve as the shock troops of a firefighting force, were killed on Sunday afternoon when they were overtaken by flames.

“In normal circumstances, when you’re digging fire lines, you make sure you have a good escape route, and you have a safety zone set up. Evidently, their safety zone wasn’t big enough, and the fire just overtook them. By the time the other firefighters got in, they didn’t survive,” Morrison said.

The crew was initially reported missing before the U.S. Wildland Fire Aviation service said the team had perished in the blaze, which erupted on Friday near the small town of Yarnell about 80 miles (128 km) northwest of Phoenix, the state capital. 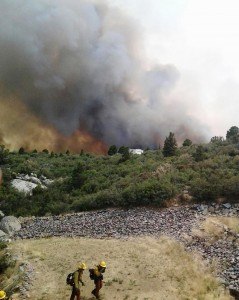 “They were … highly-skilled professionals who, like so many across our country do every day, selflessly put themselves in harm’s way to protect the lives and property of fellow citizens they would never meet,” the president said.

Prescott Fire Chief Dan Fraijo called the tragedy “one of the worst wildfire disasters that’s ever taken place”. He said he did not know the circumstances that led to the 19 deaths.

He said one member of the 20-man crew had been in a separate location and survived. There was no immediate information on his condition.

“We teach our people to be safe, to take safety precautions. Sometimes, unfortunately, it just doesn’t work out,” he told reporters at a news conference after darkness fell. He said the unpredictable weather paired with tinder-dry conditions can be a volatile mix for those on the front lines of wildfires.

The blaze, ignited by lightning and stoked by strong, dry winds and a heat wave that has baked the region in triple-digit temperatures, has charred more than 2,000 acres (405 hectares) of tinder-dry chaparral and grasslands, fire officials said.

Authorities ordered the evacuation of Yarnell and the adjoining town of Peeples Valley, alerting residents through reverse 911 emergency calls to homes and sending sheriff’s deputies door to door, according to the InciWeb fire news site of the U.S. Forest Service.

The two towns, which lie southwest of Prescott, Arizona, are home to roughly 1,000 people.

Steve Skurja, spokesman for Yavapai County Sheriff’s Office, said at least 200 structures had been destroyed, most of them in Yarnell, a community consisting largely of retirees. Fire officials said most of the buildings lost were homes.

The men’s families “are in terrible shock,” he added.

“This is as dark a day as I can remember,” Governor Jan Brewer said in a statement. “It may be days or longer before an investigation reveals how this tragedy occurred, but the essence we already know in our hearts: fighting fires is dangerous work.”

The Yarnell Hills fire was one of dozens of wildfires in several western U.S. states in recent weeks. Experts have said the current fire season could be one of the worst on record.

The National Fire Protection Association lists just seven previous incidents in the United States during the past century that killed as many or more firefighters than on Sunday in Arizona, topped by the loss of 340 firefighters in the Sept. 11, 2001, attack on the World Trade Center.

The only U.S. wildland blaze that surpassed Sunday’s disaster was the so-called Devil’s Broom fire in Silverton, Idaho in 1910, in which 86 firefighters perished, according to the association.