Long seismic safety bolts on the new eastern span of the San Francisco-Oakland Bay Bridge that haven’t failed may have to be replaced nonetheless, a regional transportation official said on Wednesday.

Officials have previously said even a fix for the 32 bolts that failed when they were tightened last month could take months, threatening to push back the scheduled Labor Day opening of the new $6.3 billion span. 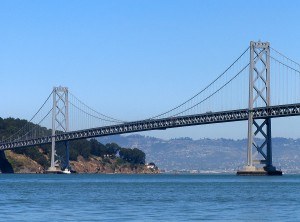 Heminger told the toll authority that he would have a final determination about the bridge’s opening date when he returns in two weeks.

The rods connect steel earthquake safety devices called shear keys to the deck of the bridge and a large concrete cap.

The 32 that failed were among a group of 96 from 2008. Hyrdrogen embrittlement, at least in part because of moisture and water from the foggy environment enveloping the bridge, was to blame for their failure, California Department of Transportation Director Malcolm Dougherty said on Wednesday.

Those bolts will be cut off and left in the bridge structure because engineers believe they will not work at all.

“Even though 32 of the 96 bolts have failed, we are writing them all off. We are not counting on any of them,” Dougherty said.

Another batch of 192 bolts from 2010 has been installed, and though state transportation officials have reported no failures in those bolts, Heminger said officials are still considering replacing them.

He said he could not yet estimate how much that would cost, but Dougherty said after the meeting any fix will exceed $1 million, and taxpayers ultimately may be hit with some of that cost.

The new bridge, which is replacing a span damaged during the 1989 Loma Prieta earthquake, is designed to withstand a major temblor. It is already years late in opening and billions of dollars over budget.

Documents released this month by the California Department of Transportation show its inspectors found structural integrity issues with some of the bolts several years ago, before they were installed.

The documents were unclear about whether the problems were remedied before the bolts were delivered and installed. The inspectors noted that the bolts failed elongation tests for structural integrity and said they were concerned about the quality of work by a company that galvanized the bolts to prevent corrosion.