Colorado lawmakers are debating a change in state law that would allow cars without drivers on roads.

A bill to make Colorado at least the fifth state where automatic cars are legal is up for its first debate Tuesday in the Senate Transportation Committee. 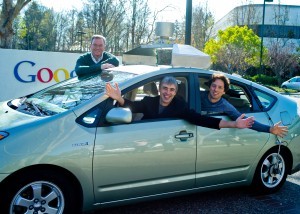 The driverless cars are being developed in California by Google. Colorado’s proposal would state that automated cars must still contain licensed drivers, and the cars must have an override switch so they can be driven manually if needed. The “drivers” in automated cars would be allowed to text or type, hands off the wheel and feet off the pedals.

With smartphone-wielding drivers more distracted than ever, backers said robotic vehicles have the potential to significantly reduce collisions and traffic fatalities. Nearly all car accidents are a result of human error.

Google has predicted that autonomous vehicles will be commercially available within a decade.

“I just love this kind of technology and want to make sure we encourage this kind of innovation,” said the bill’s sponsor, Republican Sen. Greg Brophy, of Wray.

Brophy, one of the most tech-savvy members if the state Legislature, said he envisions a day when people aren’t required to be in autonomous cars at all.

“Wouldn’t it be cool if you could send your car to school to pick up your kid when he’s sick and you can’t get out?” Brophy asked.

Then he smiled and added, “I would think that was cool. I don’t know that everybody else the state is comfortable with that.

“So we’ll start with small steps.”