You know what you’re missing? A fire hydrant to call your own.

Now you can have one to take care of, at least.

A group of volunteer techies and the Alaska city of Anchorage launched a new computer application this week that allows a citizen to adopt a fire hydrant in his or her neighborhood, keep it free of snow, name it, and maybe report on its status so the Anchorage Water and Wastewater Utility will know.

Find the app at hydrants.opendata.muni.org. 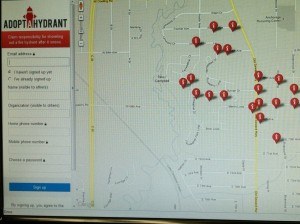 “It’s pretty friendly,” said Becky Boone, a senior program analyst at Resource Data Inc., who with some other people tailored the application to Anchorage and already has adopted a hydrant in Midtown. “You go to the website, create a profile, put in your address.” The hydrants close to where you live will appear on a map, and you can pick one to take care of.

The web site will send reminders when it’s time to clear the snow away.

A few local technology-savvy people, encouraged by Lance Ahern, chief information officer for the city, adapted the program from a national group called Code for America. The national group finds ways to engage people in civic activity through the use of technology.

Ahern said he’s been following Code for America for a while.

“We looked at ideas and picked one,” Ahern said. “I picked the one I thought we could do quickest and easiest.”

It also turned out to be timely as Anchorage awaits its first big snowfall of the year.

“When we do get snow in town, big dumps, all the hydrants get covered at once. It’s difficult for us to get out and make sure all the hydrants are clear,” he said. It’ll help the neighborhoods and the AWWU crews whenever residents pitch in, he said.

About 30 hydrants had been adopted as of Dec. 4, Boone said, but the main publicity has been word of mouth, and the site only went public a day earlier.

“We would be happy if we could engage 200 people,” she said.

Boone said the same concept can be adapted for other purposes, such as adopting bus shelters.

Brendan Babb, another tech volunteer, talked about some other ideas: The group could put city restaurant inspection results into a format that people could check on their Smart phones. It could create a tour of public art in Anchorage. There could be an active map of places where there have been bicycle accidents.

The civic applications help people do something neighborly, Babb said.

As for the hydrant program, “I think it’s all of us against the winter,” Babb said.