Detectives spend their lives looking for pieces. The right piece can solve a homicide. It can clinch a conviction, ease a conscience or unravel a lie.

So often, their cases start at night, in the rain along a rural road. The pieces are scattered across the asphalt.

When most people pass a bad crash, they crane their necks for a glimpse of twisted metal, a flash of mortality.

For the Snohomish County Sheriff’s Office Collision Investigation Unit, it’s their workplace. A single piece can have a lot to say. In cop-land, they’re called “C.I.U.”

The team is made up of one sergeant and four detectives. They handle about 150 collisions a year, maybe 15 of them fatal. Some of their cases are prosecuted as vehicular homicides. Their mission is to prove guilt and innocence, and provide expert testimony for criminal and civil cases.

People get hurt in crashes, and they die. The detectives must figure out what happened. 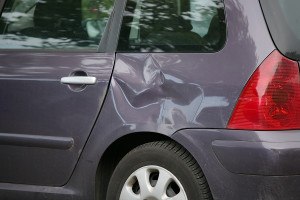 Here, cops with science and math skills can shine.

They also work with victims and their families, and try to help others learn from fatalities, detective Doug Gold said. They see the pieces come together.

Detectives share a wry sense of humor and a grim determination. They work around each other, used to each other’s rhythms.

Each case has a lead, but at a crash scene, everyone pitches in.

Their pagers go off whenever there’s a serious wreck in county jurisdiction. They don’t know the details until they get there. Cars collide in infinite ways.

“Each and every case is a little different,” Gold said.

Crashes are inherently messy. Injured people need aid. There may be bodies, debris.

Detectives must document everything as best they can, taking hundreds of photographs. Cars must be towed, evidence bagged. They’ll crawl around in the mud, looking for clues.

“Then it’s sit down for weeks or months, depending on what the case is, and what other cases you have, and systematically put that together,” Gold said.

To start, they need a map. It’s called “total station.” The detectives use engineering technology to create a 3-D model of the crash scene. They use a piece of equipment that’s part of the Trimble 5600 series, the yellow tripod you see on the side of the road when someone is surveying, or police are investigating a recent crash.

The machine uses lasers, prisms and computer software to create map-points for key spots and pieces of evidence.

In the old days, detectives measured scenes with footsteps or paces, Gold said. Then, they got tape measures.

In the 1990s, total station technology became affordable and accessible, and law enforcement jumped on. The tools are more accurate than anything used before, Gold said.

Where things land can reveal the path they followed, detective Joe Goffin said.

The detectives do their best to determine the speed that vehicles were moving. Sometimes it’s not possible. Witnesses might be among the dead. People might not talk, or are injured so severely they may never remember.

The detectives gather everything they can. They try to put the crash back together.

“You get raw data to start with,” detective George Metcalf said.

The detectives revisit the scenes, over and over.

They need similar weather conditions to test the road. They estimate how far each driver could have seen ahead. They bring out similar cars, and recreate the view from behind the wheel, based on each driver’s height.

Everything is photographed, measured and sometimes videotaped.

They use spray paint to mark the pavement, a shorthand in neon squiggles and dots.

At one scene, on a cold morning this spring, they gathered on a wooded country road near Arlington. Passing drivers did their customary brake-tap as they spotted the squad cars lining the road.

Metcalf measured out the scene with signs he’d crafted from yardsticks, poster board, black spray paint and stencils. The signs were jammed into traffic cones so they stood up, marking distance within every photograph the detectives took.

In this case, the detectives wanted to see how the suspect’s speed felt on the same stretch of road. A volunteer drove. A detective rode in the passenger side, video camera rolling. From around the corner, out of sight, you could hear the engine roar before the car crested the hill.

The detectives on foot nearby cleared the asphalt, scrambling into the weeds, out of the way. The car flashed past. The detectives seemed to share a nod.

Watching them, death seemed drilled down, facts, measurements, data — so different from the magnitude of a lost life.

C.I.U. deals with that, too, guiding victims and their families through the legal system, providing what answers and comfort they can.

They know every crash may be the subject of a lengthy criminal trial, or a multimillion-dollar civil lawsuit, sometimes taking years.

And every week, more cars crash.

The sheriff’s impound lot is down a curvy gravel road near Cathcart. It’s circled by cyclone fence, wrapped in barbed wire and topped with surveillance cameras. It’s what prosecutors call “Car Jail,” a place of rust, bent metal and twisted safety glass.

On a sunny day in July, C.I.U. met at the impound lot to download information from a device commonly called “the black box.” It’s not really a box, and it’s not really black. Most modern vehicles have one: some kind of on-board computer that might record how fast a car was going, when its air bags deployed or if brakes were used before impact.

Most black boxes come with two access points. Newer cars have a digital port, somewhere beneath the steering wheel. The module itself usually is buried underneath a seat or the center console.

The detectives pulled on heavy-duty gloves to protect their hands. On one sedan, the dashboard was too crumpled to find the port by sight. Detective Al Baker found it by touch. Goffin plugged in a laptop. The sedan’s black box was blank. Some cars sustain too much damage.

“So that’s a zero,” Baker said. “We were hoping for the best, but now we’re going to have to depend on my math.”

The data from a black box can confirm the detective’s own conclusions — a process prosecutors compared to checking the answers in the back of the book.

The detectives find facts in tire marks, broken glass, paint chips and blood. People’s statements must be compared to the evidence.

Vehicles driven in hit-and-runs can have strands of the victim’s hair stuck in the glass. Paint transfers between objects scraped during impact. People leave behind genetic material: blood, skin, bone.

“This is one of the few units that forensically does 90 percent of its own work,” Fenter said.

Crashes also cause injuries that detectives analyze to evaluate survivors’ stories, like the different marks seat belt straps leave, depending on where somebody was sitting.

It all goes into the file, layer upon layer.

Collision investigations take longer than most. It might be six months or a year before a prosecutor decides whether to file charges.

All crimes must be reconstructed, Snohomish County deputy prosecutor Paul Stern said. The sheriff’s C.I.U. detectives must explain each case so prosecutors, the defense and a jury can understand.

“They’re using the law of physics and their training to tell us what happened to the vehicles,” deputy prosecutor Tobin Darrow said.

The detectives’ focus on details, and their willingness to admit their own margins of error, makes them good witnesses on the stand, Stern said.

“There are limited factual disputes when you’re dealing with mathematical and scientific formulas,” he said.

The detectives aim to investigate each case so thoroughly that guilty people won’t risk trial. That saves a family from testimony, and also saves public expense.

The last piece of a case can become its conclusion. That’s what the detectives are looking for, after all: an answer.

Why was he hurt? Why did she die?

“You just let the evidence lead you where you need to go,” Metcalf said.