An amateur weather station recorded a wind speed of 114 miles per hour during last week’s storm along the Alaska Range.

The gust was recorded Sept. 17 in Dry Creek, a community 40 miles southeast of Delta Junction.

National Weather Service meteorologist John Lingaas told the Fairbanks Daily News-Miner that speeds recorded at such stations are not as reliable as those clocked at professional ones. But based on the damage, the reading might have been accurate, he said.

“It was not the usual storm wind because it did so much damage,” Lingaas said. 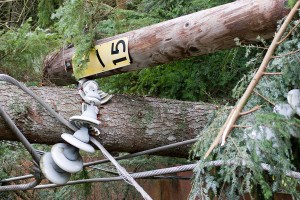 The wind tore away hundreds of trees between Delta Junction and Tok, sending many onto buildings and power lines. A forestry official estimated that 75 percent of the timber was down in Dry Creek.

A 114 mph gust would be a record for the region, Lingaas said. No gust has exceeded has topped 77 mph since 2000. That was in Delta Junction, a place where the newspaper is called The Wind.

“It looked as though someone took the biggest shop vac you could ever imagine and just sucked the entire landscape clear of leaves and grass and small plants,” said Diana Chadwell of Dry Creek.

The Alaska Division of Homeland Security and Emergency Management declared a disaster for the entire region. The state plans to open temporary disaster offices at the Tanacross Community Center from Oct. 3-5 and at the Tabernacle in Dry Creek on Oct. 16 to answer questions and accept applications for state assistance.

With winter on the way, agency spokesman Jeremy Zidek said people should not let the possibility of state assistance stop them from making needed repairs. He advised people to document storm damage before starting the work and to save receipts.

Meanwhile, some residents have taken advantage of the storm to stock up on firewood.

“If there’s a tree down, people are cutting it up,” said Al Edgren, of the Division of Forestry in Delta Junction.