Colorado mining authorities have dug through a mountainside and reopened the dark granite shaft of an abandoned mine that turned deadly – trying to find options for dealing with one of the West’s worst environmental problems.

The Pennsylvania Mine, perched above timberline, discharges an acidic orange stream moving 181 pounds per day of toxic metals into Peru Creek and the Snake River, which flow into Denver Water’s Dillon Reservoir.

The poisoning of the watershed has gone on for more than 60 years. 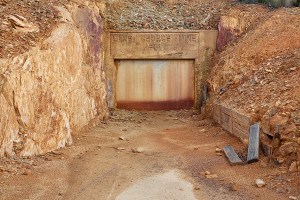 Yet state officials say the risk of lawsuits prevents cleanup of this mine and thousands of other abandoned mines that have impaired 1,300 miles of Colorado streams and, according to federal estimates, the headwaters of 40 percent of Western rivers.

“The idea is to just get ourselves in there and see what the remedy might be,” said Bruce Stover, director of Colorado’s Office of Active and Inactive Mines, who was peering into the Penn Mine last week.

Orange slime – containing iron, cadmium, aluminum, mercury, zinc and lead – coats the walls of the mine 4 inches thick. The U.S. Forest Service and the Environmental Protection Agency paid for the use of heavy machinery to dig through 200 feet of collapsed mountainside to open the mine shaft.

Stover and contract workers are trying to unravel an underground spaghetti of side tunnels and fissures. If the main shaft were plugged, would toxic water back up inside the mine, where it could be neutralized? Or would the mine drain through other openings and spew toxic metals at multiple points across fragile tundra? That information could help determine how a cleanup could be done most efficiently.

But, for years, congressional leaders have refused to address the problem of legal liability at abandoned mines – despite repeated efforts by U.S. Sens. Michael Bennet and Mark Udall, both Colorado Democrats.

The EPA’s current interpretation of the Clean Water Act says “good Samaritans” and state governments embarking on projects to reduce the contamination of watersheds could be held liable for costs of full-scale cleanups costing millions of dollars a year to treat toxic water forever. This has prevented partial cleanups that, while not stopping all pollution, could improve water downstream.

“What we need in Colorado and across the country is federal legislation that enables the state and other parties to take smart and affordable steps at these sites,” said Loretta Pineda, state director of reclamation, mining and safety. “Right now, under the language of the Clean Water Act, we cannot take those steps without risking enormous financial liability.”

At the Penn Mine over the past year, state inspectors measured a boggling array of toxic metals discharged into Peru Creek. They counted 186 pounds of cadmium, 4,496 pounds of copper, 21,529 pounds of manganese, 21 pounds of lead and 39,896 pounds of zinc. These metals have left Peru Creek and much of the Snake River devoid of aquatic life.

While a U.S. Forest Service sign along the Snake near the Keystone resort holds out the promise of catching fish, state officials said not even bugs can survive.

The Penn Mine drainage flows past Keystone, where the Snake is a source for artificial snow-making, and into Dillon Reservoir. Denver Water treatment systems remove most contaminants before metro residents receive drinking water. The reservoir drains into the Blue River, which flows into the Colorado River.

Mining here started in 1879, earning $3 million before the mine closed about 1940 and owners disappeared. Today, it looms as one of the worst among 450 abandoned mines that state officials know to be leaking significant toxic metals into watersheds.

Across the West, federal authorities estimate there are as many as 500,000 abandoned mines. At each site, federal and state authorities have determined they cannot locate “viable responsible parties” who could be held accountable. So cleanup burdens fall to taxpayers.

The problem got so bad in Colorado that, in 1994, Stover and others designed a solution. They set up a largely passive system at the base of the Penn Mine that channeled acid drainage from the mine to a vat full of powdered limestone. When the limestone was mixed into the drainage, heavy metals fell out in a series of settling ponds that later could be emptied – preventing toxic discharge from poisoning Peru Creek.

“We even had EPA approval,” Stover said.

But state authorities never turned the valve to activate this system. Just as they were about to do that, the EPA issued its ruling that raised liability concerns.

“Water supply is a huge issue in this state,” Karsian said. “We’re going to be tracking it down to the last drop.”

On Friday, Udall said he’s still working with Senate colleagues and the EPA to enable good Samaritans – groups such as Trout Unlimited are interested – to pursue voluntary cleanups.

“Watershed groups, local and state governments, private industry and nonprofits should continue working collaboratively to slow the flow of toxic metals into our waterways,” he said.

State authorities say a full-scale cleanup of the Penn Mine, involving removal of 100 percent of toxic metals, would require about $10 million for construction of a water-treatment plant and $1 million a year to run it perhaps forever. They say their exploration of the Penn Mine may establish that much cheaper solutions are available.

When Stover and his team explore and pinpoint sources of the drainage, he said, they’ll consider the possibility of installing a massive cement plug for about $300,000. Such a bulkhead could contain toxic drainage inside the mine and allow control of oxygen and use of bacteria to neutralize acid drainage before it reaches the watershed.

That’s the best case. The worst case, Stover said, is that tunnels and cracks prove to be so interconnected that backed-up water would gush out of multiple openings across the tundra. This would replace today’s toxic discharge with multiple new flows, complicating any cleanup.

Either way, he said, fixing the problem requires entering and exploring the old shaft.