A judge has dismissed most of a widow’s claims against the federal government after her husband was killed by a mountain goat at Washington’s Olympic National Park two years ago, saying that even if it seems unfair, the park can’t be sued for the decisions it made. 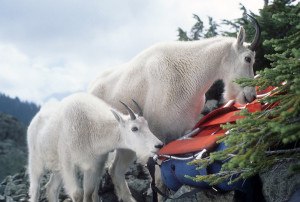 Robert Boardman, a 63-year-old registered nurse, was trying to protect his wife and friend when the 370-pound billy goat gored him, severing arteries in his thigh, on a trail near Hurricane Ridge in October 2010. The goat is believed to have been one that harassed park visitors for years, and although staff tried various techniques for scaring it off and posted signs warning of the danger, they didn’t take steps that might have prevented Boardman’s death: killing or relocating the animal.

His wife, Susan Chadd, sued, accusing the government of negligence in its management of the goat, known as “Klahanne Billy” for the name of a nearby ridge. She also alleged that the park botched the rescue effort – the one claim that was not dismissed in U.S. District Judge Robert Bryan’s ruling in Tacoma this week.

Bryan dismissed the rest of the claims, saying that even though the park could have acted more quickly to kill or relocate the goat, its actions are immune from lawsuits under the Federal Tort Claims Act because they involved an exercise of discretion related to public policy.

“Even in sad cases like this one, the court is duty bound to uphold the law, however difficult or unjust the result appears,” Bryan said.

One of Chadd’s lawyers, Stephen Bulzomi, said that while he disagrees with the decision, it is not immediately appealable because one of the claims survived.

“It certainly circumscribes the scope of the trial,” he said.