Federal safety regulators are focusing on loose screws in the tail of a World War II-era fighter plane modified to race faster than 500 mph (800 kph) as a likely cause of the horrific crash that killed the pilot and 10 others during air races at the Reno National Championship Air Races last September.

The National Transportation Safety Board released nearly 1,000 pages of documents and photographs on Tuesday while continuing to investigate the official cause of the accident that also injured more than 70 people at Reno Stead Airport.

Among other things, the documents point to potential deficiencies in the safety inspection procedures, something race organizers said they’re addressing at this year’s 49th annual National Championship Air Races, scheduled for Sept. 12-16.

One NTSB document shows inspectors noted about a month before the race that the screws were too short in one of the trim tabs that helped control the P-51 Mustang flown by Jimmy Leeward.

According to interviews with the technical inspectors and the crew, the trim tab problem “was due to one or more screws on the right elevator trim tab not having enough threads protruding from the nut and there was an area washer missing in the wheel well.”

The crew reportedly fixed the problems and the plane was cleared to race, but the NTSB said there was “no written procedure or sign off to ensure” that was the case. 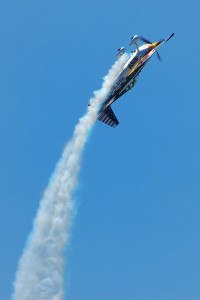 Formalizing plane inspection procedures was one of the recommendations of a panel of experts air race officials commissioned in the aftermath of the crash to help make the event safer.

Specifically, the panel led by former NTSB chairman Jim Hall said, in May, that it is important to be sure “uncorrected discrepancies” regarding airplane modifications “do not slip through the system.”

A spokesman for the air races said event officials don’t want to comment on the NTSB documents ahead of any findings on the cause of the crash, but are working on improving the event’s safety inspections.

“It doesn’t necessarily mean that there are more inspections,” Mike Draper said Tuesday. “What we’re trying to do is further formalize the inspection process to make sure that any issues that are found, there’s a very well determined – well-prescribed, essentially – chain that shows that issue was addressed before the plane takes to the race course.”

Analysis of the accident, along with a determination of probable cause, will come later this month when the final report on the investigation is completed.

The competition about eight miles north of Reno is the only event of its kind in the world, with planes flying wing-tip-to-wing tip around an oval pylon track, sometimes just 50 feet (15 meters) off the ground and at speeds of over 500 mph (800 kph).

Leeward, 74, was traveling at 530 mph (853 kph) when his plane dubbed the “Galloping Ghost” pitched skyward while making a turn, then rolled and slammed into the ground nose first near box seats.

Still photos showed part of the tail known as the elevator trim tab came off as the plane went out of control and aviation experts theorized at the time it could have caused the crash.

Still photos showed part of the tail known as the elevator trim tab came off as the plane went out of control and aviation experts theorized at the time it could have caused the crash.

Photos from moments before the crash appear to show the tab at an awkward angle, indicating the control rod is broken.

Investigators say it’s possible the trim tab was fluttering because screws were loose, and the movement put enough pressure on the control rod to break it. Another hypothesis is that the plane hit a wake of air, which increased the speed of the flutter and broke the rod.

Either way, they said, it’s unlikely the wake of air alone broke the tab.

Inspectors say the break would have jerked the pilot’s control stick sharply, likely causing him to lose control and sending the plane into a roll.