Last year a mile-high wall of dust in Phoenix, Ariz., knocked out power, halted flights and coated everything in its path with a thick sheet of dust. It was the third dust storm in six weeks during a memorable monsoon season for the city. 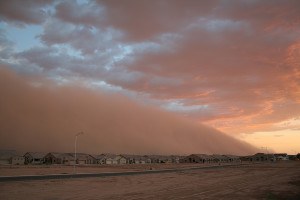 Similar massive movements of sand or dust, referred to by the African term ‘haboob’, are raising concerns among experts, businesses and insurers for their increasing frequency and the damage they can bring.

They have been known to cause power failures, utility damage, airport closings and motor vehicle accidents. Joseph Plumeri, chairman and CEO of global insurance broker Willis Group Holdings, recently cited haboobs as one of the new risks for commercially-sensitive areas.

Dr. Thomas Gill, an associate professor and graduate advisor of the Department of Geological Sciences at the University of Texas, El Paso, defines a haboob, a term that has been used by the scientific community for many decades, as a specific type of dust storm.

“The term haboob comes from the Arabic from North Africa. It means something akin to strong wind. It’s been used for a very, very long time in Africa. However, meteorologists, and weather forecasters and scientists have used this term in North America for about 40 years or more,” Dr. Gill said.

The haboob is not the same as a regular dust storm; it’s bigger and more dangerous.

“A haboob is different from an ordinary dust storm in that’s it’s generally much more ominous appearing and much more threatening,” Dr. Gill said. “A haboob is like a giant wall or front of dust that blows in often to a clear, calm sky. Sometimes it almost comes out of nowhere.”

“What differentiates a haboob from a normal dust storm is first of all the size. Haboobs have been determined to be as much as 60 miles wide, can blow at a rate of anywhere between 20 to 60 mph and have lasted up to three hours. There’s a very hard downspout of wind which then picks up sediment and other matter that is on the ground and pushes it forward on a high velocity,” Passman said.

The two types of dust storms can be compared to the difference between a flash flood and a regular flood.

“A regular flood might happen when you have heavy rain and the water starts building up and rising and rising, but a flash flood can just come. The water comes rolling in from out of nowhere under otherwise dry conditions. And it’s a similar thing with the haboob,” said Dr. Gill.

In North America, haboobs form as a result of very strong downdrafts of wind blowing out of thunderstorms, the associate professor said.

“They’re most common…in June and July…in Arizona, New Mexico, western Texas and southern California, where the ground is still very dry and sometimes even the thunderstorms are dry. So, when a blast of wind comes out of a thunderstorm out of a downdraft it picks up the dust and sand and blows it like this wall of dust that moves in,” said Dr. Gill.

Because haboobs are quite often accompanied by rain a mud storm can result, Passman said.

“Well, a haboob can definitely lead to damage. The damage is usually not so much from the dust and sand blowing in it…The biggest concern about a haboob is the winds, because the winds are extremely strong. The haboob is actually caused by these extremely strong downdrafts blowing out of a storm. Winds can blow 40, 50, 60, 70 miles an hour or more, and the effects of a haboob can be like those of any strong wind storm objects being blown over, roofs and structures being damaged, and so on,” Dr. Gill said.

These types of weather events cannot only damage buildings and structures, but they can also contribute to motor vehicle accidents. That’s because a thick wall of dust is much like a white out, a winter blizzard condition seen in the much of the northern states, where visibility drops down to zero.

“So, all of a sudden not only are you fighting extremely strong, possibly gale force or hurricane force winds, but the visibility drops down to nothing in this roiling, boiling cloud of sand and dust, so especially if people can’t see them coming, drivers can get disoriented. There is a higher risk of accidents and collisions, sometimes chain reaction incidents on roads,” Dr. Gill said.

Passman said he has seen claims arise from power interruption, automobile accidents and interruption of airlines. In addition, utilities, transmission and distribution lines are being damaged as well as pole mounted transformers.

Planes can be affected because the air is extremely turbulent, Dr. Gill said.

“There’s a real danger to aircraft, so usually when they can be seen coming aircraft divert around them, airports may be shut down causing flight delays, cancellations, chaos at a place like Sky Harbor Airport, and really losses in terms of just delays, disruptions, and so on,” said Dr. Gill.

Besides damage arising from high winds, heavy rain and dust, lightning is also a risk.

“Because they’re associated generally with thunderstorms, they can be associated with lightning. All of those grains of sand and dust rubbing up against each other in the wind get electrically charged, so they can cause discharges on power lines and transformers. Actually storms like that actually cause transmission losses or losses of energy from overhead power lines. They can cause sparks so they could potentially cause fires. So, they can be somewhat electrified which also increases the risk.”

Whether the damage from a severe dust storm is a covered loss is still up for debate, said Passman.

“From the insurance point of view…our concern is that we believe that some underwriters or some insurers may argue that a haboob is not physical damage from the property insurer’s perspective,” Passman said. “They may argue that it is a weather condition and does not cause physical damage. We believe that the costs associated with cleanup of a haboob and damage of a haboob should be covered under an all risks policy.”

“Sand and/or dust-caused losses are covered under standard property insurance policies but only when the direct force of wind damages an insured building, causing an opening in its roof or wall, and then the sand or dust enters through this opening,” the I.I.I. said in a statement.

According to a statement issued by ISO, claims arising from dust storms need to be reviewed on an individual basis.

“Dust storms (or Haboobs) are not a new occurrence and have been around for a long time. However, as an advisory organization, it is not appropriate for ISO to comment on general loss scenarios, as questions of coverage rely on the specifics of the event, the exact contract language involved, and the type of loss or damage alleged to have occurred. Insurers may be in the best position to comment on this topic,” ISO said in the statement.

There’s no clear indication that global warming has any effect on the creation of dust storms, according to Dr. Gill.

“You know, we’re not sure. Certainly the research and the computer models from climatologists suggest that in the future, as the climate warms, what we call extreme events will become more frequent, that extreme storms of all kinds may become more frequent. That would certainly include more severe thunderstorms which spawn haboobs in desert areas. There certainly has been, in recent years, an increase in the number of these haboobs that have been affecting cities and populated areas from southern California to Texas, including cities such as Tucson and Phoenix,” Dr. Gill said.

Other factors may also contribute to the increased number of haboobs seen recently.

“We’re not sure whether there are actually more of these storms happening, or just due to chance more of them seem to be blowing in to populated areas. There is some feeling perhaps with the increase of urbanization and human utilization of the desert areas of the Southwest from building cities, from developing fields for agriculture, that, for example, there may be more vacant lots, more construction areas, more agricultural fields where the soil is loose or disturbed, and therefore more easily picked up,” Dr. Gill explained.

“They really don’t know why there seems to be an increase of these events. Some people are attributing it to increasingly dry and arid environments. Believe or not, some people are attributing it to the economy, i.e., that there’s a lot of construction as cities expand…and there are construction sites that have been abandoned or have not been finished because of the economy and a storm comes buy, picks up debris and sand from the construction site and it just contributes to the already happening event,” Passman said.

Regardless of how or why haboobs form, Passman thinks adjusters will see more claims related to the dusty weather event.

“We think that these [haboobs] are going to become more common, we’re going have interesting and complex claims that could arise out of these,” Passman said.

Jacques Billeaud and Terry Tang of the Associated Press contributed to this report.