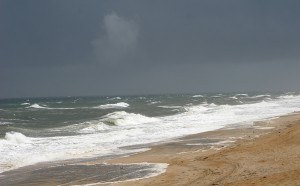 In April they forecast 10 tropical storms, with four strengthening into hurricanes and two becoming major hurricanes with winds of at least 111 miles (178 km) per hour during the six-month season that began on Friday.

The revised numbers would still be slightly below average for hurricanes in the region that includes the Atlantic Ocean, the Caribbean Sea and the Gulf of Mexico, the pioneering forecast team said.

“We have increased our numbers slightly from our early April forecast, due largely to our uncertainty as to whether an El Nino will develop later this summer as well as somewhat marginal Atlantic basin conditions,” said Phil Klotzbach, lead author of the forecasts.

The El Nino weather pattern, marked by a warming of the tropical Pacific, tends to bring shearing winds that deter hurricane formation in the Atlantic. Several forecast groups have predicted El Nino would form by late summer, when the Atlantic hurricane season moves into its busiest period.

The CSU forecast includes the two Atlantic tropical storms that sprang up in May before the official start of the season. Tropical Storm Alberto formed and then fizzled off the South Carolina coast, while Tropical Storm Beryl came ashore near Jacksonville Beach, Florida, on Monday.

Some 37.3 million people – 12 percent of the U.S. population – live along the coast from North Carolina to Texas in the region most often threatened by Atlantic hurricanes, the Census Bureau said.

An average season brings about 12 tropical storms, with six hurricanes and three major hurricanes ranking at Category 3 or higher on the Saffir-Simpson intensity scale.