A Hawaii zip line tower collapsed because of weak soil, sending a worker plunging 200 feet to his death, concluded an investigation released Tuesday by the state Department of Labor and Industrial Relations. 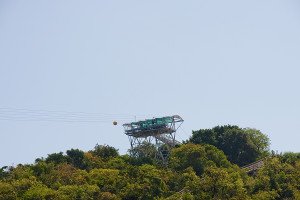 The department’s Occupational Safety and Health Division launched a workplace investigation after worker Ted Callaway, 36, of Lahaina, died Sept. 21 while test-riding a zip line being built along the Big Island’s Honolii Stream. His co-worker Curtis Wright, of Miamisburg, Ohio, was critically injured.

Ground anchors were built in soil that couldn’t withstand the weight of the tower, cables and rider, the investigation found, and GoZip LLC failed to take reasonable precautions to ensure that the anchors could support the load.

“Unfortunately, this is another workplace fatality that was preventable and we share the sorrow of the family, friends, co-workers and others affected by this accident,” said Dwight Takamine, director of the Department of Labor and Industrial Relations.

Experiential Resources, Inc. and its operating arm GoZip said in a statement they would dispute the department’s findings.

The companies say they will continue to work with the state to resolve differences of opinion. They’re committed to helping the state and industry learn from the tragedy, the statement said.

The companies said they’re unable to comment further “until a resolution has been achieved.”

Citations against GoZip include not making sure the ground anchors could support tower loads without failure and failure to ensure that employees riding the zip line wore helmets. The state proposes penalties totaling $13,500. GoZip is contesting the matter and a hearing will be scheduled before the state Labor Relations Board, said William Kunstman, DLIR spokesman.

The investigation found that with Callaway riding the line and Wright standing on the platform of the tower, the ground anchors supporting the tower “abruptly pulled out of the ground.” An engineer hired by GoZip to conduct testing after the accident concluded that the subsoil was Pahala Ash, a fine particulate mineral that looks like normal soil but loses up to 90 percent of its natural strength when disturbed.

“The engineering report stated that much of the soil along the Hamakua Coast of Hawaii Island that appears to be red dirt might in fact be Pahala Ash,” the department said. “This raises serious concerns about the stability of structures that rely on ground anchors for support, including zip line towers at other locations on the island.”

But in March, Hawaii lawmakers deferred a bill, effectively killing it for the session, calling for the state to take oversight of safety for the tourist attractions that send thrill-seekers gliding along cables strung high above rural areas of Hawaii at speeds approaching 30 mph.

The bill would have required the Department of Labor and Industrial Relations to conduct $100 inspections. Instead, the industry will continue being responsible for its own safety regulations.

Experiential Resources said it has built hundreds of individual zip line spans and has worked in 40 states and 12 countries without incident. It says it has never had an anchor or line failure in 19 years of business.