Volunteers will play a big role in picking up debris from last year’s tsunami in Japan when it starts hitting the beach in Oregon. 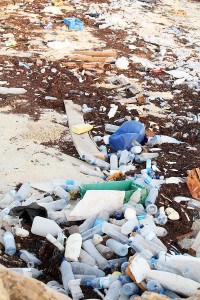 “They do most of it now,” Mike Zollitsch, emergency response director for the Oregon Department of Environmental Quality, said of volunteers. “I would say the potential is they will be very involved in this cleanup.”

The nonprofit group SOLVE organizes two massive volunteer beach cleanups a year on the state’s 362 miles of beach – all of it public. Beach visitors pick up a lot, and beach rangers for the Oregon Department of Parks and Recreation constantly pick up big tanks, tires, milk jugs, water bottles, bits of plastic rope and fishing nets.

State and federal agencies and nonprofit groups meet Tuesday in Salem to start putting together a plan for dealing with the debris currently forecast to start washing up this winter. Zollitsch expects the plan to be ready this summer.

So far, the big questions – how much is coming, what will it be, and when will it get here – remain unanswered, said Chris Havel, spokesman for the Parks and Recreation.

“There’s not a lot of uncertainty about our capability to handle it,” Havel said. “What is uncertain is, is it really going to be an unusual volume.”

Until they know more, no one has any idea how much it will cost the state. But it could add up quickly. Havel said Beverly Beach State Park already spends $35,000 a year to dispose of beach trash.

“It’s getting nibbled to death by ducks that’s the big concern,” said Havel. “It is unlikely to be the big thing that ends up being costly. It’s the constant stream of little things that will be costly. We can’t put a number on that now.”

State Parks does not have a firm estimate on how much it collects, but has been noticing an increase in recent years, Havel said.

While Oregon is relying on NOAA to keep track of the debris to let them know when it is coming, and how much, there is not much federal money available to help state cleanup efforts, said Zollitsch. The state can tap federal funds for oil and hazardous materials cleanups, but that is not expected to make up much of the material, he said.

“Even if it ends up being a small problem, we have to be prepared as if it were going to be a larger problem, just in case,” Zollitsch said.

There could even be an economic boon for coastal areas, if a lot of people decided to go to the beach to see the tsunami debris, he added.

Oregon Shores Conservation Coalition already monitors beach debris at several locations along the coast, and will be keeping an eye out for increases, said executive director Phillip Johnson. It is also preparing plans to turn out volunteers if a big cleanup effort is needed.

“We are not going to wait for someone in authority to come and do it,” Johnson said. “We in Oregon have a long tradition of taking care of our beaches.”