A former Iditarod champion who was forced to drop out of last year’s dog-sled race when he nearly severed his index finger is suing the Oregon company that made his knife and the sporting goods store that sold it to him.

The lawsuit, filed by Mitch Seavey of Seward, seeks at least $100,000 in lost winnings and other damages.

“He was doing pretty well. He may well have won the Iditarod,” Seavey’s attorney, Bill Ingaldson, told the Anchorage Daily News.

The past two Iditarod winners have collected more than $50,000 and a new pickup truck, along with lucrative sponsorship deals. Championships also create heroes of the lead dogs, making their offspring more valuable. 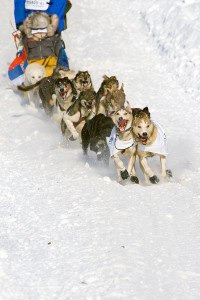 Kershaw Knife Company of Tualatin, Ore., has denied the claims, writing in a Jan. 24 court filing that Seavey’s injury was caused by “his own negligence or assumption of risk or by the negligence of others.”

A lawyer for Sportsman’s Warehouse said Seavey has produced no evidence he lost money.

“Mr. Seavey bears the burden of proving all of his damages, including his claim that but for cutting his finger, he would have won the (2011) Iditarod,” Sportsman’s attorney John Tiemessen wrote in an email. “As Mr. Seavey probably knows better than most, there is a wide gulf between hoping you will win, even thinking you might win, and actually winning the race.”

Seavey, 52, is a member of one of Alaska’s most successful mushing families and won the race in 2004. He placed seventh this year, his 10th top-10 finish, and was joined in the race trail by his father and son.

The lawsuit claims Seavey nearly lost his finger while using the gut hook on the back side of the blade to cut open a bag of straw during a stop to rest his dogs at the Ophir checkpoint. Doctors reattached the digit, but it now points at an awkward angle and “always catches on things,” Ingaldson said.

The suit accuses the knife company of negligence. Both the blade-maker and retailer are accused of breach of warranty and misrepresentation for selling a defective product and failing to warn of potential injuries.

Ingaldson said the folding knife suffers a serious design flaw: The lever or button used to release the locking blade is near the middle of the handle, and it can be depressed when the gut hook is used as intended. That frees the blade to close on the user’s fingers, he said.

The lawsuit centers on the most essential of tools in a dog musher’s sled. A knife offers security, said Two Rivers musher Aliy Zirkle, who carries at least three blades on the trail, including one clipped to her parka.

If a dog’s leg becomes wrapped in a line or the team tangles itself around a tree, the musher must quickly cut the animals loose, she said. At checkpoints, racers use blades to slash open food bags or pry ice from frozen sled runners.