University of Wyoming professor Gary Franc has spent his career studying plant pathology as it relates to crop production, but now his research has taken him away from the ground and into the sky.

Franc, who also has a background in microbiology, is searching the clouds for bacteria. The specific bacteria he’s looking for, ice-nucleating bacteria, help water droplets freeze and may play a role in creating precipitation and influencing weather patterns.

It’s an area of research that’s seeing a resurgence of attention, but for Franc, the study of the role of bacteria in the atmosphere goes back decades.

“I’m sure there’s a whole ecosystem in the sky going on that we are just getting an inkling about,” he tells the Laramie Boomerang. 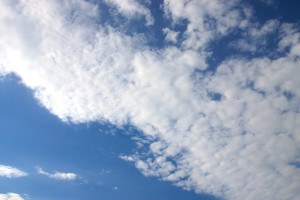 Clouds are composed of microscopic water droplets. In order for precipitation to form, in most cases, those droplets need to freeze, which happens when they come into contact with a particle, such as a piece of dust.

Some cloud particles have a biological nucleus, such as bacteria, at their center instead of a piece of dust. And some species of bacteria can even enable the water droplets to freeze at warmer temperatures.

“Basically, these bacteria have proteins that line up water molecules that mimic the crystalline structure of ice,” Franc said.

“The water would snap-freeze instantly, just turn to ice. I was like, my god, what evolutionary pressure would there be to cause an organism to actually freeze water?” Franc said.

Independent of the research in Wisconsin, a future University of Wyoming professor, Gabor Vali, made a similar discovery in the mid-1960s.

Franc – who grew up on a dairy farm and had always been fascinated by bacteria – continued his studies in bacteriology and plant pathology, eventually ending up at Colorado State University as a research associate in the 1980s.

For his dissertation, he studied a potato pathogen called Erwinia caratovora. He wanted to know how to keep the bacteria from re-contaminating potato fields and began searching for its source.

“I found it was in the irrigation water, which was a new concept at that time,” he said.

The irrigation water came from the river, where he also found Erwinia caratovora.

He worked his way upstream, expecting he’d eventually find water without the bacteria, helping him locate the source. But he even found the bacteria in the headwaters, and then in the snowpack, after he filtered hundreds of pounds of snow.

Sure enough, he found Erwinia caratovora in rainwater on the West Coast and in the ocean.

Franc continued collecting atmospheric samples after coming to the University of Wyoming in 1991, working at Storm Peak Laboratory in Steamboat Springs, Colo. The laboratory sits atop 10,500-foot Mount Werner, allowing scientists to collect samples from clouds as they move across the summit.

While at CSU, Franc worked with atmospheric scientist Paul DeMott. The two reunited several years ago as part of a project funded by the National Science Foundation to continue researching the composition of the nuclei of ice particles in clouds.

“We know about things like dust from deserts that get generated in massive quantities from Asia and Africa and float around in the air and act as the condensation nuclei for clouds,” DeMott said. “What we don’t know a lot about are the sources from other types of things, whether it be pollution or the biological.”

DeMott and his colleagues have developed a method of measuring particles in the air that produce ice crystals. Franc, working with post-doctoral researcher Thomas Hill, is figuring out what those particles are made of.

“We have developed the molecular methods and tools to decipher what those nuclei might be in the atmosphere,” he said.

Franc said there are many possible reasons for bacteria and other organisms, such as fungi, to be able to initiate freezing. For example, when such bacteria colonize a plant surface and aid in ice formation, frost crystals can enter plant tissues, cause injury and allow the bacteria easier access to nutrients.

The ability to initiate freezing might also allow bacteria that are swept up into the atmosphere to return to earth more easily.

“They come down much faster. It allows them to cycle much faster,” he said.

Franc and DeMott said these questions are important as science grapples with issues such as climate change and its relationship to atmospheric and oceanic ecosystems.

“It’s a detail that has yet to make its way carefully into climate models,” DeMott said of ice nuclei from biological sources.

“There so much that’s unknown. There’s a lot of potential,” Franc said.