Preventing pilots from losing consciousness from sudden high gravitational forces was among a set of recommendations made by the National Transportation Safety Board to try to avoid a repeat of last year’s horrific air race crash in Reno that left 11 people dead and 70 spectators seriously injured.

Investigators said pilot Jimmy Leeward, 74, was traveling at 530 mph around an oval, aerial track when his modified P-51 Mustang experienced some type of “upset” – a significant event that caused the plane to pitch skyward while making a turn, then roll and slam into the ground nose first near box seating.

Hersman said instruments from the aircraft showed the plane exceeded 9 Gs, and that appears to have incapacitated the pilot as blood rushed from his brain.

“We know very well that that is the limit for human beings, and it is very difficult for people to maintain awareness at 5 Gs – 9 Gs is significant,” she said. 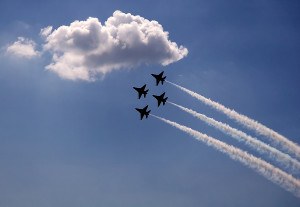 The NTSB recommended that pilots in the Unlimited Class undergo special training to learn how to mitigate the potential effects of high G exposure. The board also said the air races should evaluate requiring pilots to wear special suits to minimize G-forces.

Experts say F-16 fighter pilots, who wear special flight suits, can typically take 9 Gs, but only for a limited time. And those are modern planes designed with tilted seats intended to help keep blood flow to the brain. Average roller coasters expose riders to about 2 to 3 Gs, but only for brief moments.

Tom Rose, a commercial pilot from Mississippi whose father died in a crash at the Reno races in 2002, said it might be possible to require pilots to wear G-suits to counteract excessive pressure changes. But he said it might not be practical, and it might not have helped Leeward.

“The thing that happened out there with the G-load he incurred, I don’t know if a G-suit would have mattered. With 10 Gs, slam, it hits you like a baseball bat.”

Rose said some older aircraft may not be set up to accommodate G-suits. But he added that they probably could be retrofitted.

“I don’t know what it would cost,” he said. “But in the scheme of things it’s not something they can’t do.”

Mike Houghton, president of the Reno Air Racing Association that sponsors the annual races, said his organization will consider all the NTSB’s recommendations, and said G-force training is already being implemented.

But he doesn’t think flight suits are feasible. The gear costs anywhere from $14,000 to $20,000 and could make maneuverability difficult for pilots in the cramped cockpits, he said.

Leeward’s Galloping Ghost was rounding the eighth pylon when the upset occurred and massive G-forces came into play, said Howard Plagens, NTSB’s lead investigator. From that point, no more than 8 seconds passed before the plane crashed.

A final report on the cause of the crash is still months away, though it’s expected to be released before this year’s air races, scheduled for Sept. 12-16. Plagens said the Galloping Ghost’s final seconds will be thoroughly scrutinized.

“That 8 or 9 seconds is going to get a lot of written words” in the final report, he said.

Still photos also show that a part of the tail known as the elevator trim tab came off after the plane was already out of control. Aviation experts shortly after the crash had theorized the part’s failing may have caused the plane to go down.

Hersman said her agency was not trying to stop the air races. “We are here to make it safer.”

Another safety recommendation would require pilots to provide an engineering evaluation that includes flight demonstrations to show modifications made to planes are structurally sound.

To ramp up the aircraft’s speed, the wingspan on Leeward’s plane had been shortened from about 37 feet to about 29 feet, and flight controls were changed.

A mechanic in 2009 certified that the Galloping Ghost, after undergoing modifications, was “controllable throughout its normal range of speeds and throughout all maneuvers to be executed.”

But the NTSB noted there was no indication the plane was evaluated “while operating within the speed and flight regimes that would be encountered on the race course.”

“Our investigation revealed that this pilot in this airplane had never flown at this speed on this course,” Hersman said. “We are issuing a safety recommendation to ensure that pilots and their modified airplanes are put through their paces prior to race day.”

Houghton, however, said Leeward likely would have opened the throttles during practice rounds.

Other safety recommendations involve changes to the race course layout and where fuel trucks and spectators are located.

Hersman said it’s possible that putting more distance between the planes and the spectators could have helped, but stopped short of saying the tragedy could have been prevented by such a change. “I don’t think we can say what the outcome would have been,” she said.

The association’s event at Reno Stead Airport is the only event of its kind, where planes fly wing-tip-to-wing-tip around an oval, aerial pylon track, sometimes just 50 feet off the ground and at speeds that can top 500 mph.

Houghton said he welcomed the NTSB recommendations and most were “doable.” But he doesn’t think having them in place last fall would have changed the course of events.

“I don’t think any of these would have had an impact on the tragedy we experienced,”

The association must still get a waiver from the FAA and a permit from the Reno-Tahoe Airport Authority, which owns the airport, before the September races can be held.