A Lakewood, Calif., man made his initial appearance in federal court Monday following his arrest by U.S. Immigration and Customs Enforcement’s (ICE) Homeland Security Investigations (HSI) special agents for importing more than 1,000 counterfeit Microsoft Office CD-ROMs and selling them to unsuspecting customers over the Internet. 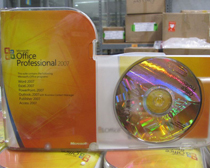 Collier Bennett Harper, 30, is charged in a four-count federal indictment following the seizure of two shipments of Microsoft Office Professional Edition 2007 software CD-ROMs. Specifically, the indictment charges Harper with two counts of trafficking counterfeit goods and two counts of smuggling. If convicted of all charges, Harper faces a maximum sentence of 60 years in federal prison.

“With the advent of the Internet, counterfeiting now threatens nearly every consumer in the nation and it also harms the valuable intellectual property of our manufacturers,” said U.S. Attorney André Birotte Jr., Central District of California. “That is why we are working with our partners at HSI to crack down on the illegal sales and distribution of counterfeit products like the software packages seized in this case.”

“The sale of counterfeit goods is not a victimless crime,” said Claude Arnold, special agent in charge for HSI Los Angeles. “These activities undermine our economy, rob Americans of jobs, stifle American innovation and promote crime. Intellectual property theft amounts to economic sabotage, which is why HSI will continue to aggressively pursue product counterfeiters and those who sell counterfeit products.”

Investigators estimate, based upon the manufacturer’s suggested retail price, the seized software would have retailed for approximately $150,000 had it been genuine.